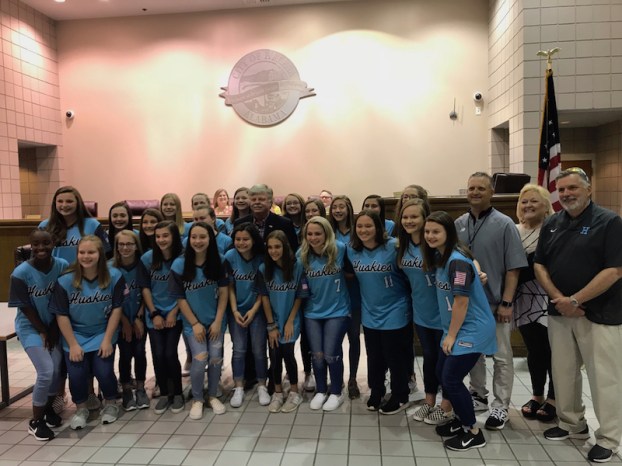 HELENA – The Helena Middle School softball team completed a feat that’s almost unheard of in the game of softball, and that’s celebrating back-to-back undefeated seasons to claim another tournament championship.

The Helena Middle School softball program has been nothing short of a dynasty in recent seasons, as the Huskies have now won 74 games in a row and completed a 35-0 season in 2018 and a 32-0 season in 2019.

Other accomplishments for Helena include four straight conference titles, 17 tournament championships in the past four years and 106 wins in the last 107 games.

Girls on the HMS softball team put in the work and that work did not go unnoticed, as the team and coaches were recognized by the Helena City Council at the Monday, April 22 Council Meeting.

Helena Middle School’s latest title was a 10-7 win over Chelsea to claim the league championship.

Helena Middle School Head Softball Coach Mark Sanders started the program in 2008 and said he’s just happy to be a part of something so great.

“Three years ago, we were 34-1 and that one loss was an extra innings loss so that’s one loss in three years so it’s an honor,” Sanders said. “I always tell people that I feel like I’m the lucky one to get to be a part of this and it’s an honor for me to do it and it’s my calling. I love coaching female athletes, especially middle school, and I feel like I make a difference.”

Sanders said he loves being where he’s at in Helena and feels like it’s currently where God has placed him for a purpose. He doesn’t mind making the hour and a half drive each day to Helena because he loves his job, loves Helena and his team.

“I just enjoy getting to be a mentor and that’s my focus,” Sanders said. “These girls, they know how to play softball when they come to us. When they come to us, we focus on just teaching them to be a team and to love their teammates unconditionally. We do weekly devotions with them and we talk about what it looks like to be a good teammate because it’s such a critical time for them. They’re going through a lot of stages of their lives and it’s a tremendous blessing to be a part of it.”

By GRAHAM BROOKS / Staff Writer HELENA – The Helena Huskies are moving onto the winner’s bracket in the Class... read more