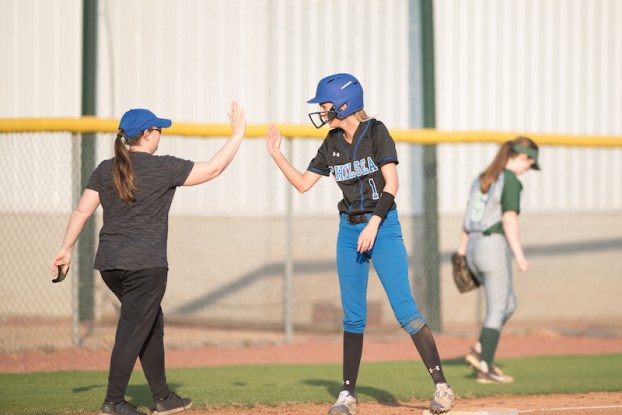 Chelsea’s softball team took down Calera and Pelham in the Class 6A Area 8 tournament to remain alive in the postseason and clinch a spot in Regionals. (Reporter photo/Keith McCoy)

HELENA – In a season of ups and downs, the Chelsea Hornets’ softball team showed true resiliency in the Class 6A Area 8 tournament held at Helena between April 30 and May 2.

After falling immediately into the loser’s bracket of the tournament with a 6-0 shutout loss to Pelham in the opening round to drop their eighth game in the last nine outings, the Hornets were on the brink of their season coming to an end.

Following that loss to the Panthers, Chelsea stepped back on the field later that night and took on Calera in an elimination game and responded in a big way.

The Hornets put together 15 runs in a three-inning span to pick up a 15-0 mercy-rule victory and keep their season alive. Chelsea scored three runs in the second inning and then put the game away with 12 runs in the third inning.

Chelsea was led by Lexi Serio with a 3-for-3 game with three RBIs and three runs scored. Olivia Bergert, Chloe Eidson and Abigail Bryars all went 2-for-3 with two RBIs. Karson Rich and Carly Taylor each went 1-for-2 with an RBI.

In the circle, Bryars tossed all three innings and allowed no hits while striking out four.

Two days later, the Hornets got ready to play again, and this time were forced to take on the team that beat them in the first round in order to keep their season alive.

But this time around, Chelsea built off its momentous game-two victory over Calera and continued a strong effort defensively.

Bryars followed up her four strikeout effort with another four strikeouts in this game, but more impressive, she pitched a complete seven innings and allowed just four hits with no runs to help lead Chelsea to a 3-0 shutout victory.

The Hornets scored two runs in the fourth inning on a two-run home run from Lexi Serio, and then added an insurance run in the top of the seventh to pick up the victory.

Chelsea was led by Eidson at the plate with a 3-for-3 game, while Serio drove in two of the three runs with her home run. Brooke Burback, Bergert and Bryars each added a hit apiece.

By ALEC ETHEREDGE | Sports Editor  BIRMINGHAM – Thanks to two wins against the Ramsay Rams in the Class 5A Area... read more