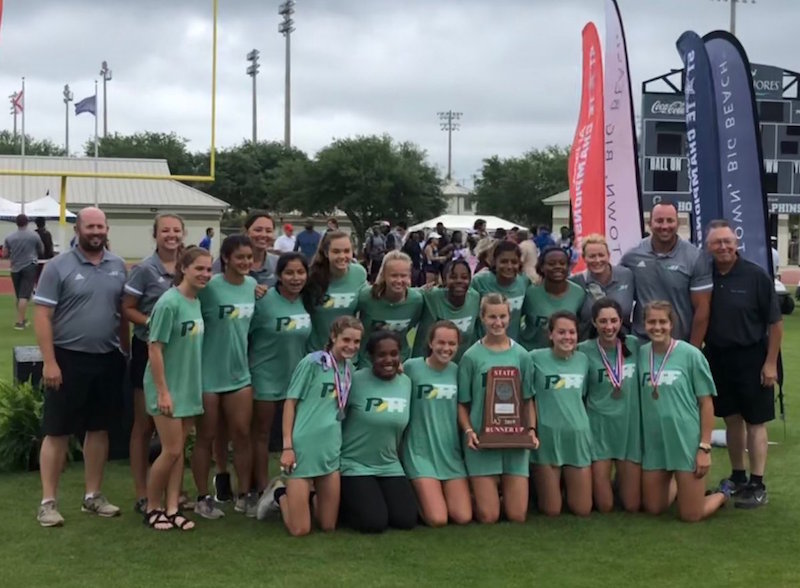 The Pelham girls’ track and field team finished second at the 2019 AHSAA Class 6A State Track and Field Championship. (Contributed)

GULF SHORES – With several team finishes inside the top 10, and numerous individual state champions and podium finishers, the 2019 AHSAA Outdoor State Track and Field Championship held at Gulf Shores’ Mickey Miller Blackwell Stadium May 2-4 was a success for 5A and 6A teams Briarwood, Calera, Chelsea, Helena and Pelham.

The biggest highlight from a team standpoint at the meet came from the Pelham Panthers’ girls team, who went on to finish second in the team standings behind powerhouse Homewood. The Panthers totaled 64.5 points, while the Patriots claimed the 6A state championship with a score of 123.

Also in 6A, the Helena girls and boys both finished sixth, while the Calera girls finished seventh and the Pelham boys 11th.

As for the Briarwood Lions, the boys took home a finish of seventh in the team standings, while the girls finished 21st in a deep field of 5A teams.

But the strongest performance went to the Pelham girls, and a big reason for that was their consistency in several events highlighted by an individual state championship from Katie Strozier.

She finished just ahead of teammate Alex Wilkins, who clocked in at 2:15.90.

Those two also flashed their ability in the 1,600-meter run finishing on the podium in that race as well. Strozier finished second in the event with a time of 5:03.66, while Wilkins finished third for the second time with a mark of 5:14.31.

Those finishes alone gave Pelham 30 of the team’s 64.5 in just two events.

Behind them, however, were some other strong performances starting with a state championship from the 4X800-meter relay team, who set a new school record with a time of 9:39.28.

The Panthers also got consistent effort from Erin Long, who has been a dominant force all year, and at the state meet, she claimed several top 10 finishes.

Long’s day was highlighted by a podium finish of third in the triple jump thanks to a distance of 37 feet. That 37 feet came on her final jump as well.

Long also finished fourth in the high jump, fifth in the javelin thrown and sixth in the long jump

The Calera and Helena girls teams also performed extremely well at the event.

Calera was highlighted by a state championship from the 4X400-meter relay team with a time of 4:03.69, while Syncere Henderson and Nia Maye had podium finishes individually.

Maye’s podium finish came in the 400-meter dash as she finished third with a time of 57.58 seconds.

Like the Eagles, Helena ended up winning a relay state championship, as the 4X100-meter relay team claimed the title with a time of 49.48 seconds.

Individually, Allison Tanner’s finish of second in the high jump marked the Huskies’ lone podium finish. She finished the event jumping a height of 5 feet, 4 inches. She also finished sixth in the triple jump and eighth in the long jump.

To close out the girls’ standings, the Briarwood Lions had no podium finishers, but still had several individuals with noteable finishes.

Lauren Musachia, Chloe Finocchiaro, Caroline Keller and Ellie Sherrod all finished inside the top 10 of their respectieve events.

Moving over to the boys’ 5A-6A events, Briarwood got its strongest performances of the event from Jake Nunn.

To match that, the Helena and Pelham boys also had an individual state champion at the state meet.

For the Huskies, it was Jonah Hyde, who claimed the title in the high jump thanks to clearing a height of 6 feet 6 inches, while teammates TJ Funches and Bowman Downey finished just behind.

Pelham’s state championship came from Dorian Tolbert in the discus throw. Tolbert totaled 165 feet, 11 inches in the event to claim the title by more than 5 feet.

Dominic Fanella also had a strong meet for the Panthers, finishing fourth in the 800-meter run thanks to a time of 1:58.09.