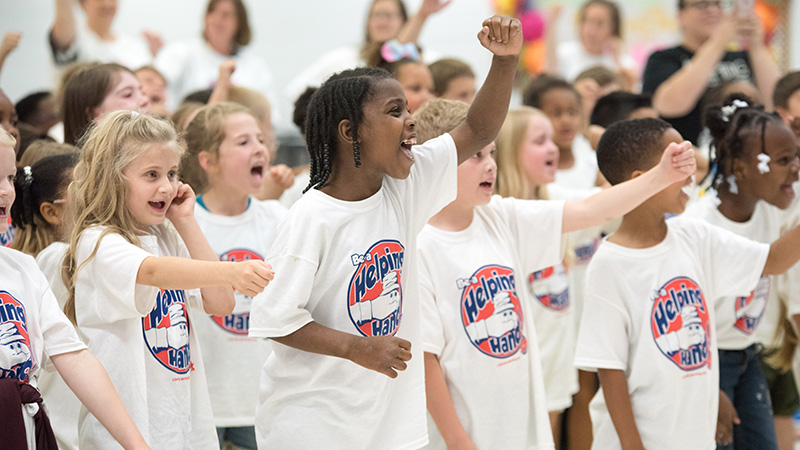 Meadow View Elementary School students take part in a Super Citizens graduation ceremony at the school on the afternoon of May 2. (Reporter Photo/Keith McCoy)

ALABASTER – Everyone from school maintenance technicians to active-duty military personnel were honored by Alabaster’s second graders during a May 2 “Super Citizens” ceremony at the city’s two elementary schools.

During the ceremonies, which marked the students’ completion of the Liberty Learning Foundation’s Super Citizens program, each second-grade class recognized a hero in the community they identified while completing the program over the past several weeks.

“By honoring a hero, you become a hero. So not only are you celebrating some awesome heroes today, you’re becoming heroes yourselves, which I think is pretty cool,” Ashley Woodson with the Liberty Learning Foundation told second-graders at Meadow View Elementary School.

Each hero received a torch pin modeled after the Statue of Liberty’s torch and thunderous applause from the students gathered for the ceremonies.

“Heroes, we hope you’ll wear this as a constant reminder of the impact you have on your community,” Woodson said.

By the time the ceremonies were over, there were few dry eyes in the schools’ cafeterias.

“Kids, the words you said, it really touched their hearts,” said MVES Principal Rachea Simms. “The little things you notice about people, always let them know so they know how special they are. We can’t wait to see what you will go on to do in the future.”