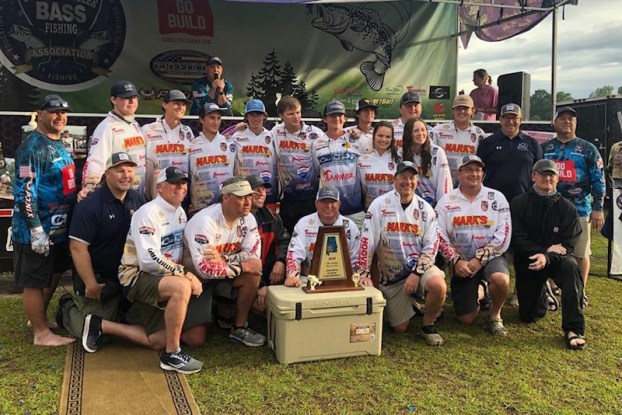 The Briarwood Bass Club finished the 2019 season as state champions after winning three regional tournaments and finishing second in the final tournament of the season. (Contributed)

Following the final ASABFA event of the 2019 high school bass fishing season, the Briarwood Christian Bass Club was named the 2019 State Champion after a season full of success, while Oak Mountain, Shelby County and Thompson also capped off special seasons.

With the final standings being an accumulation of points earned throughout three regional events over the last month as well as a two-day Classic event to close out the season, the Briarwood bass team totaled 3,487 points to claim the title, which was more than 100 points ahead of Hayden in second.

The next highest local team in the final rankings was Oak Mountain, which finished the season with 3,206 points to claim eight overall. Shelby County was eight spots lower than that in 16th with 3,084 points, while Thompson was just behind in 19th with 3,009 points.

All four of those teams claimed a spot inside the top 20 of the standings, while Chelsea finished 31st with 2,875 points and Spain Park finished 42nd with 2,452 points.

The Lions run to the state championship was highlighted by three consecutive victories in the regional tournaments to become the first team to accomplish that feat in state history before then finishing second at the two-day Classic to close out the championship run.

One of the most impressive parts of the final event for the Lions was the absence of Tucker Smith, who was fishing in the Bass Masters All-American Event during the same weekend.

He’s normally in the same boat as Grayson Morris, but Morris was able to carry his own weight and finished the event in eighth place thanks to a total weight of 28.19 pounds.

Eight spots lower in 16th was the boat of Chandler Holt and David Scharf, who finished the final tournament of the year with a total weigh in of 26.22 pounds.

One spot lower, and just 0.05 pounds behind their teammates, was the team of Riley Underwood and Mason Wright. The two totaled 26.17 pounds and capped off a special season.

That duo was strong all season posting the largest number of cumulative points on the team. It marked a special close to Wright’s senior year at Briarwood, as he played a major role in the team’s success from start to finish.

Those were the three highest highest boats for the Lions, but the rest of the team also brought in fish and played a key part in the overall team title.

The team of Reid Mays and Ian Davis finished in 74th with a weight of 23.05 pounds, while Jordan Martens and Sadie Stanford finished in 108th with a total of 19.07 pounds.

Briarwood’s final team was the boat of Carson Miller and Carson McKeen, who brought in a total of 12.42 pounds to cap off a stellar season and event.

The Oak Mountain Eagles had the next highest finish in the final event with the team of Smith McGregor and Dawson Speed claiming ninth with a weight of 28.10 pounds.

The Eagles added another top-30 finisher in the team of Clay Collins and Michael Bunn, who weighed in a total of 25.20 pounds of fish.

Thompsons Bass Team also had an impressive year, and the Warriors’ highest finisher in the event was the boat of Garrett Ross and David Blair with a weigh in of 24.77 pounds.

Chandler Oliver and Josiah Campbell became the next highest team for Thompson with a total of 18.03 pounds, while Ethan Harrell and Dalton Lucas were just behind in 132nd with a total of 16.75 pounds.

Also clustered around that same spot was the boat of Brett Downs and Nathan Ruha. Those two combined to bring in a total of 16.83 pounds to finish 137th.

It was also an impressive overall season for the Shelby County Wildcats, who had six teams compete in the final event, with two of those six finishing inside the top 30.

Ethan King and Hall Dobbs were the highest finishers for the Wildcats with that duo bringing in 25.44 pounds worth of fish.

Just two spots lower in a tie for 24th was the team of Reed Horton and Luke Scherer with a total weight of 25.36 pounds.

Logan Bean and Ava Vansant finished in 141st for the Wildcats with a weigh in of 16.24 pounds, while the duo of Kai Barnett and Lloyd Harrison were just behind in 162nd with a total of 14.23 pounds.

Charlie Taylor and Angel Quintero finished 181st with a team total of 8.96 pounds, while Regan Connell and Hannah Jackson closed out the Shelby County finishers in 183rd with a total of 8.73 pounds.

The Chelsea Anglers closed out the season with a consistent effort as well.

The Hornets were led by three teams in the top 60, including the team of Jacob McGuire and Alex Massey, who finished 50th with a weight of 23.61 pounds.

In 55th was the team of Kaden Weldon and Peyton Harris with a weigh in of 23.83, while Carson Wilder and Landon Guarnieri finished 58th with a total of 23.12 pounds.

The final two teams of Lucas Jennings and Jett Moore, and Jared West and Nick McNeil, finished 174th with a team weight of 10.26 pounds.

Spain Park’s team had two boats in the event and was led by the team of James Broderick and Taylor Lansden with a total weight of 21.38 pounds. The team of Logan Willis and Chris Gaylor finished 131st with a total of 16.78 pounds.

By ALEC ETHEREDGE | Sports Editor GULF SHORES – With all three teams posting top 10 finishes in both the boys... read more