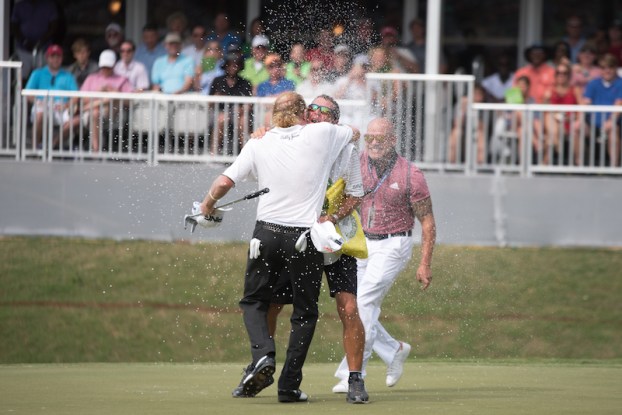 The 2019 Regions Tradition will take place at Greystone Golf and Country Club this Wednesday through Thursday, May 8-12, and will feature some of the greatest golfers from the PGA Tour Champions. (Reporter photo/Keith McCoy)

HOOVER – This week, the best golfers from the PGA Tour Champions will make their way to Greystone Golf and Country Club to take part in the 2019 Regions Tradition, and if recent history tells us anything, it’s to expect a big week.

The tournament always draws great crowds starting on Wednesday due to the celebrity Pro-Am featuring several of the top college football coaches and celebrities as well as many more, but the fans come back in droves Thursday-Sunday because of the thrilling golf from some of the game’s greatest players of all time.

With this year’s field including defending champion Miguel Angel Jimenez, otherwise known as the most interesting man in golf, as well as guys like John Daly, two-time Regions Tradition champion Bernhard Langer, Colin Montgomery, Fred Couples, Steve Stricker, Kenny Perry, Vijay Singh, Retief Goosen, Fred Funk and David Toms, there are sure to be fireworks throughout the week.

With this being the first of four majors on the Tour, it not only pits an incredible field against one another, but sets up an exciting tournament at a venue perfectly suited to host a thrilling tournament throughout the four days of the event.

With one Tour victory already to his name again this year, Jimenez will come in as one of the favorites after playing four spectacular rounds a year ago to claim the tournament by three shots.

Scott McCarron, however, may be the overall favorite in 2019 thanks to recent success. He has won two of the last three tournaments on the PGA Tour Champions taking the Mitsubishi Electric Classic in Duluth, Georgia, April 19-21, and then winning this past weekend at the Insperity Invitational in The Woodlands, Texas.

Aside from those two wins, he also has one second place finish this season and six top 10 finishes in just nine events on Tour, making him arguably the most consistent throughout the early part of the 2019 season.

Last year, McCarron played great throughout the week at the Regions and ended up finishing in a tie for fifth after a shooting one of the lowest final round of anybody in the top five at 5-under par.

He was near the top of the leaderboard after his rounds on Thursday and Friday, before a setback on Saturday, but McCarron closed out the tournament nicely on Sunday, and now has confidence heading into this year’s tournament where he could be the one to lift the trophy on Sunday afternoon.

Kirk Triplett is another guy that can’t be counted out coming into this tournament, as he currently sits in second in the Charles Schwab Cup standings behind McCarron thanks to one victory, two second place finishes and four top 10 finishes this season. That’s through just nine events this year, making him one of the most consistent early in the season behind only McCarron.

And of course, you can’t talk about this tournament without mentioning Langer as a favorite. He has not only won a tournament on Tour this season, but has a second place and third place finish with a total of four top 10s. The ageless wonder always seems to play well here, and tends to be a favorite in every tournament each week of the season.

Other winners this season that could make some noise are Tom Lehman, Mark O’Meara and Kevin Sutherland.

Beyond that, guys like Steve Stricker, Kenny Perry and David Toms are fan favorites that should have a strong shot as well.

Stricker played well in his debut last season, finishing in a tie for second at 16-under par. As a player that still spends a ton of time on the PGA Tour, he has that advantage, and so far on the PGA Tour Champions this year, Stricker has two finishes inside the top six and a tie for 11th.

It would be a surprise if he doesn’t at least compete and have chance to win again on Sunday. And as the captain of the 2020 Ryder Cup team, he’s sure to be one of the most popular throughout the week.

Toms has also been consistent this season with three top 10s, including a second and fourth place finish, as well as a tie for sixth.

For Perry, it hasn’t been his best season on the Tour, but he has one top-10 finish of sixth and has finished in a tie for 11th and 13th, as well.

Vijay Singh is another fan favorite that could play well this week with two top 10 finishes, including a tie for second, so far this season.

For fans coming out to see the always eccentric John Daly, he has two top 10 finishes on Tour this season as well with his three best finishes coming in the last four weeks of the season.

Colin Montgomerie will also be a player to keep an eye with four top 10 finishes this season, including one sixth-place finish and two seventh place finishes. With six victories on Tour, he’s a guy that wouldn’t be a surprise to lift the trophy.

And then finally, there is Fred Couples, who is scheduled to play in the event but hasn’t since the tournament was held at Shoal Creek a few years ago due to his nagging back injury.

Couples has played in five of the nine events on the Tour this year with two top 10 finishes early in the season. In three events in March, Couples finished tied for 20th, tied for 10th and tied for 17th.

If he plays, he will draw one of the largest crowds, and should be in contention due to his distance off the tee.

The fun thing about this tournament, is with such a competitive field, it can be anyone’s to win, and come Sunday, there is sure to be a stacked leaderboard of contenders with several of those popular names.

For the fans, the weather looks good every day but Friday, and you’ll meet a very fan-friendly course that isn’t too difficult to walk and has plenty of great spectator areas.

Some of the best spots to take in the golf will be on the par-3 10th hole, known as the watering hole, where you’ll have grandstands surrounding the majority of the hole. The ninth and 18th are always great viewing areas as well, and if you make your way out on the course, the bend between holes three and four, as well as the par-3 14th are some great places to catch the action.

If you are looking for tickets, several different options are available at Regionstradition.com.