“Never be afraid of a scar. It simply means you were stronger than what tried to hurt you.” –Breast Cancer Awareness

There are 3,645 women affected by breast cancer in the state of Alabama.

That number continues to climb according to the National Cancer Institute’s State Cancer Profiles website.

Treatment options can vary from radiation, hormone and chemotherapy, to surgery. 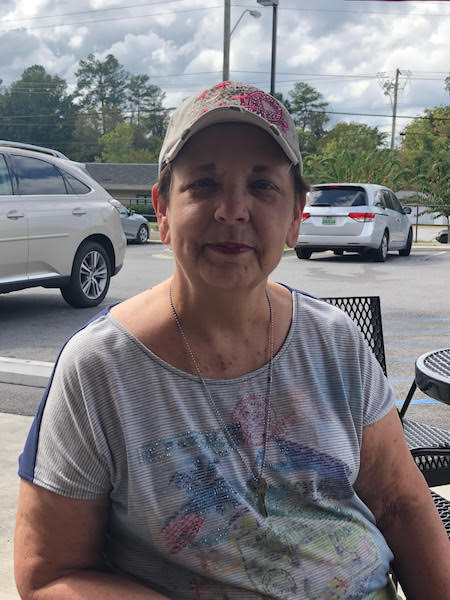 Jeani Atkison formed a local branch of Knitted Knockers, an organization that makes prostheses for women who have had their breasts removed because of cancer. (Contributed)

A breast cancer diagnosis has the potential to turn one’s life upside down from an emotional perspective.

Depending upon the extent of the procedure, patients forced to undergo radical surgical treatment such as a mastectomy face the decision of whether to undergo additional surgery to reconstruct their breasts or wear a prosthesis.

Instead of reconstructive surgery, many women choose a prosthetic.

Traditional breast prosthetics are usually expensive, heavy, sweaty and uncomfortable. They typically require special bras or camisoles with pockets and can’t be worn for weeks after surgery.

Breast cancer survivor Jeani Atkison, who teaches crochet at Evangel Church in Alabaster, formed a local branch of Knitted Knockers, the organization that makes prostheses for women who have had their breasts removed due to cancer.

Atkison started a ministry a year ago to build up survivors’ “self-esteem.”

“I had breast cancer in 2015,” Atkison said, adding she made herself a pair after obtaining the pattern for the prosthesis from the Knitted Knockers.org website.

She found a similar group in Anniston who helped her get the ministry launched. Completely handmade, the “knockers” are lightweight, soft prosthetics designed for breast cancer survivors to wear underneath their clothes.

Unlike traditional silicone breast prosthetics, knitted knockers can be worn very soon after a mastectomy; the crocheted and knitted versions are affordable, lightweight and comfortable.

Into its third year, the ministry supplies the Shelby Baptist Medical Center and Forge Breast Cancer Survivor Center at St. Vincent’s East facility with prostheses, which free to women. The group has they have given out at least 50 sets.

“I just want to reach as many women as possible,” Atkison said.

Her team of crotchetiers and knitters work a variation of hours to meet the demands for the prosthesis. Half of the team are regular knitters.

A Kentucky native, Atkison and her husband, Michael, have resided in Alabaster since 1976.

The couple have two children and three grandchildren.

For information or questions about Knitted Knockers, or if you’re interested in joining the group, email Atkison at jeaniatk@gmail.com or call (205) 419-7120.