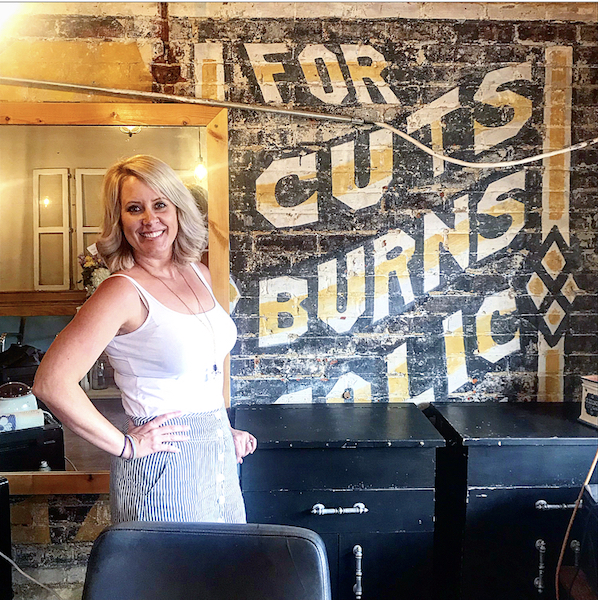 Color specialist and new business owner Christie White poses with a portion of the vintage ad found in her salon. (Contributed)

When Christie White moved from Tuscaloosa to Chelsea, she began looking for the perfect place to open her hair salon. It didn’t take her long to find a home for it on the historic Main Street of Columbiana.

When White took the keys to her new space, right next to the locally famous Davis Drugs, she got to work on renovating it right away. While she loved the antique ceiling tiles, she knew a large section of plastered and mirrored wall really needed to come down. What she found beneath the plaster facade thrilled her.

“I could tell there was antique brick, but then I found a large letter painted on it, and then another. Every little piece I took away from the plaster revealed more of it,” she said. After a day of work, they had uncovered a nearly perfect vintage advertisement for Tichener’s ointment that went down the length of one entire wall. When she saw the first part of brick she thought she’d paint, but upon uncovering the entire advertisement she felt it had so much character it should be the focal point of her salon.

“Now the space has a great historically modern look to it,” White said as she continued putting the finishing touches on her new salon with industrial style light fixtures and repurposed chalk boards.

White comes to Columbiana with a wealth of experience in her field. A former artist with Pureology by Redken, she’s traveled all over the United States teaching other stylists the secrets of amazing hair color. She has a background in working at some of the larger hair shows and most recently worked at the Tera Lane Salon in Tuscaloosa.

On why she chose Columbiana to put down her entrepreneurial roots, she said, “I saw an ad for the space on Main Street and decided to check it out. After spending a little time on Main Street and meeting many of the locals, I just fell in love with the place.”

Main Street Salon and Barber has been slowly working with customers the last week, and even enjoyed a successful open house during the first Music on Main Street event this past week.

The official grand opening will be Thursday, May 9. Main Street Salon and Barber offers a menu of cut, color and style services, as well as tanning, to potential customers, but is making plans to include more services soon, such as nails. The salon hours will be Tuesday and Wednesday from 10 a.m. to 5 p.m. and Thursday and Friday from 9 a.m. to 5 p.m., with special appointments on Mondays and Saturdays.

CHELSEA – The Crane Home in Chelsea has been added to the Alabama State Historical Register, city officials announced at... read more