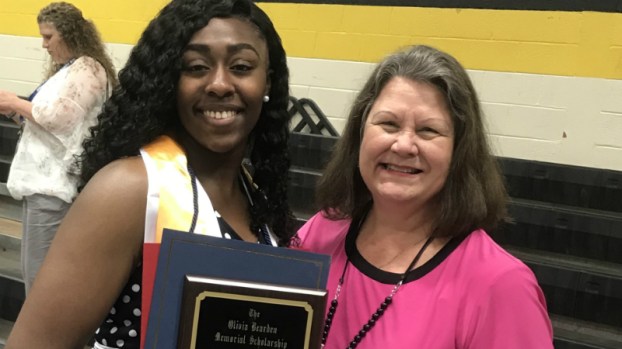 Olivia Bearden’s mother, Tammy Bearden, right, was on hand as Jalyn Kelley was presented the Courage Award. (FOR THE REPORTER/KATHY COPELAND)

Olivia Bearden was called home some 10 years ago after a long battle with brain cancer, but this courageous and persistent former student at Vincent Middle High School is continuing to leave an impact.

Two separate award ceremonies highlighted the “Olivia Bearden Memorial Scholarship Award;” and Olivia’s mother, Tammy Bearden, was present at both, speaking about her daughter each time.

VMHS holds a separate ceremony for the JROTC because there are so many participating students and many deserving awards, which speaks volumes. Because the family has dedicated the award of the scholarship to a JROTC student it is first announced at this ceremony, and then the actual plaque is given during the formal school-wide Awards Ceremony.

“Olivia loved JROTC,” Tammy Bearden said, explaining that when the family decided to start a scholarship honoring Olivia, they specified that it should go to a JROTC student. Each year, JROTC students are told of Olivia and her battle with brain cancer, her pursuit of her dreams despite her illness and the courage award given in her name.

This year, students were asked to write an essay about how Olivia has impacted their lives. The essays were then given to the family and Lt. Col. Larry Moore, who was Olivia’s JROTC Senior Instructor and reportedly adored her. He was responsible for initiating the award before he retired.

“As I read each of the essays, I was touched that even though Olivia has been gone for almost 10 years, she is still impacting lives today,” Tammy Bearden said. “Students shared their own trials and tribulations and that Olivia’s story helped them push through.”

Describing the winning essay, Tammy Bearden quoted two sentences: “I believe that Ms. Olivia Bearden knew that having brain cancer was not something she was suffering from but what she was fighting against,” and, “I believe she was an angel walking on earth and will remain an angel walking in Heaven.”

“For this, I thank you,” Tammy Bearden said as she announced Jalyn Kelley, a senior, as the winner of this year’s Courage Award. Kelley was also given $800 and a plaque which reads, “The Olivia Bearden Memorial Scholarship…Given in Honor of Olivia L. Bearden…Your Determination Allowed You to Overcome Many Obstacles and Follow Your Dreams.”

Despite her illness, Olivia was able to graduate and attend Auburn University, and she made an impact on the people in her path. Tammy Bearden explained that her family continues this award to encourage the type of determination Olivia displayed toward embracing every moment of life despite her circumstances. “It is a way to honor her memory,” Bearden said.

Sgt. Maj. Mary Kyser, current JROTC Senior Army Instructor, said, “I still have a photo of Olivia and I from 2007 on my desk because her courage still lingers through me and throughout the school. When I think of her, I can still visualize Olivia going as long as she could, then taking one more step.  She will always be the epitome of JROTC.”

Toes in the sand (community column)