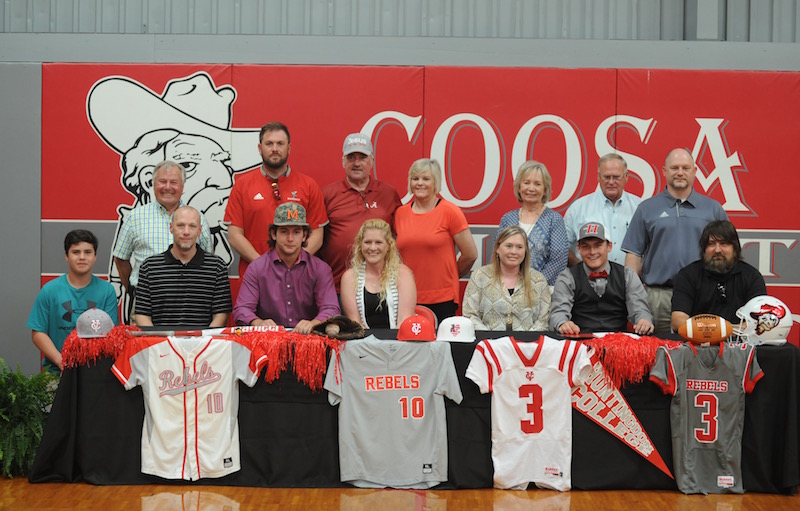 Coosa Valley’s Jackson Bryant and Kaleb Allen signed to attend colleges in a ceremony at the school on Tuesday, May 7. (Reporter photo/Alec Etheredge)

HARPERSVILE – The Coosa Valley baseball team had a successful run throughout the 2019 season thanks to a fast start that had them ranked inside the top 10 of the AISA baseball poll for a major part of the year, while the football team also had an improved season under first-year head coach Jamie Scruggs.

A big reason for that success was the play of two stellar seniors in Jackson Bryant and Kaleb Allen, and on Tuesday, May 7, the two standouts got the opportunity to sign college scholarships.

In front of family and friends, the two signed to continuing playing their respective sports at the next level.

During his final season on the gridiron with the Rebels, Bryant posted 246 receiving yards on the offensive side of the ball, and also went on to post 46 total tackles defensively with a sack and interception to his name.

Bryant also played baseball and finished his senior season with a bang thanks to an overall batting average of .289 with 28 hits and 13 RBIs for the Rebels. In his first 11 games of the 2019 season, he batted above .400 in each contest to lead Coosa Valley to the fast start.

Now, Bryant will be moving on to Huntingdon College where he’ll continue to play the sport of football.

“I want to thank the Huntingdon coaching staff for giving me the opportunity to play the next four years,” Bryant said. “I also want to thank my parents and family for all they’ve done for me. They always love and support me.”

Bryant also knows the key role all of his teammates played each night they took to the field together.

“I want to thank my teammates for always having my back and being there for me when I needed them,” Bryant said.

He’ll now look to continue dominating at the next level after signing to attend Marion Military Institute.

“I just want to thank God first,” Allen said. “I also want to thank my parents and grandparents for always being there and supporting me. I’m so excited to be playing at the next level and can’t thank the coaching staff and my teammates enough for helping that happen.”

Both have represented Coosa Valley extremely well, and will now look to do the same for their new school.

Chelsea sweeps No. 2 Hillcrest to earn spot in…