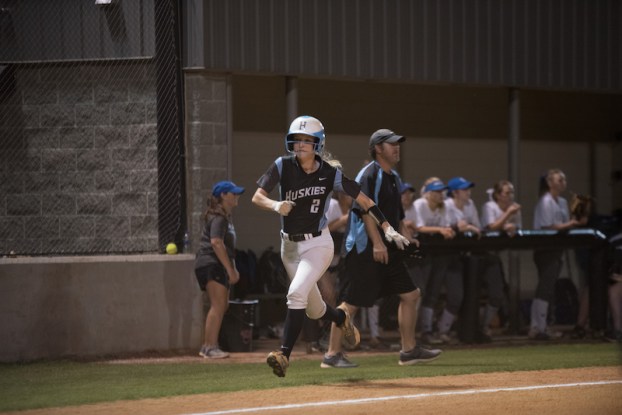 Helena's Emily Crowe finished with three RBIs as the Huskies defeated Stanhope Elmore 10-7 in the opening round of the Class 6A Regional on Thursday, May 9. (File)

Helena opens 6A softball Regional with win over Stanhope Elmore

OXFORD – The Helena Huskies softball team is moving on to the winners’ bracket of the Class 6A East Central Regional after coming out and defeating Stanhope Elmore 10-7 in the opening round of the regional the morning of Thursday, May 9.

Helena’s offense was the story against Stanhope Elmore as the Huskies collected 10 runs through the first four innings and finished with 14 hits as a team.

Stanhope Elmore mounted a bit of a rally in the final two innings scoring six runs, but the deficit was too much to overcome as Helena held on for the win.

The Huskies got things going early in the top of the first inning using a two out rally to put three runs on the board. With runners on second and third, Helena’s Emily Crowe hit a double to left field to clear the bases to make it 2-0 Helena. Following Crowe, Lexie Bullock hit an RBI single to score Crowe making it 3-0 Helena early.

In the bottom of the third inning, Helena’s Megan Fortson, Torie White and Crowe hit three consecutive singles, with the last one scoring Kelsi Bargman pushing the lead to 4-0. With two outs in the inning, Bargman hit a two-RBI triple to clear the bases and extended the lead to 6-0. The final run of the inning came off a Julia Wilkins RBI single to score Bargman to cap off a four-run inning.

Helena’s final runs of the game came in the bottom of the fourth inning off a Fortson RBI single, an RBI double from White and an RBI single from Bullock pushing the lead to 10-1.

Stanhope Elmore’s biggest inning offensively came in the top of the sixth inning as the frame began with two walks and an error. Helena’s Cam Bailey entered in the sixth inning but was replaced by Avery Barnett when the Huskies lead was cut to 10-4 with no outs in the inning. Barnett got the Huskies out of the jam with a pop out, ground out and a pop out as the Helena lead was now 10-5.

In the final inning, Barnett hit a batter and allowed a single to open the top of the seventh inning. After a fielder’s choice, Stanhope Elmore hit an RBI single to make it 10-6 with one out. The second out in the inning came on a fielder’s choice and after an error brought the score to 10-7, Barnett ended the game with a strikeout to give the Huskies the win.

Crowe led the Huskies at the plate going 2-for-4 with three RBIs, while Bullock and Bargman each had two RBIs for the Huskies.

With the win, Helena will now play the winner of the Hillcrest-Opelika game on Thursday, May 9, at 6 p.m. if the weather permits.