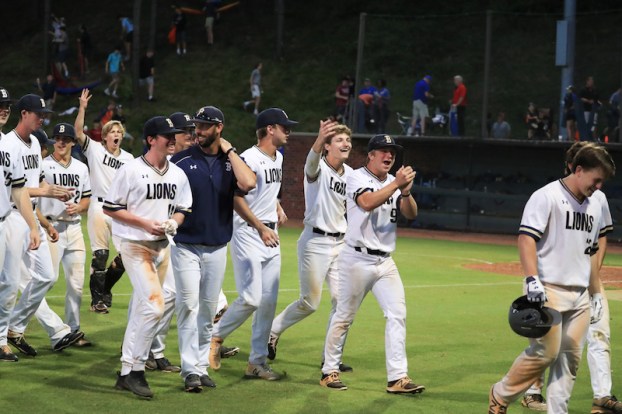 The Briarwood baseball team is headed to the Class 5A state championship series starting Thursday, May 16, after sweeping Sylacauga on Friday, May 10, in the semifinals. (For the Reporter/Dawn Harrison)

SYLACAUGA – The week of May 6 was a special week for the Briarwood baseball team, and on Friday, May 10, the Lions capped it off by sweeping Sylacauga in the semifinals of the Class 5A playoffs to earn a spot in next Thursday’s state championship series for the first time since 2009.

Following their thrilling walk-off win on Monday, May 6, against Chilton County that saw Carson McKinney hit a two-run double to left-center field to give the Lions a 3-2 win, Briarwood came back in the semifinals against the Aggies and didn’t skip a beat thanks to impressive pitching from Andrew Ponder, Jonah Carroll and Blake McKenna in game one and McKinney in game two.

In the first game of the series, that group of three pitchers combined to allow just four hits and struck out five to lead Briarwood to an easy 6-0 shutout, while McKinney came out in the second game and went the distance in a tightly contested game.

He got a two-run cushion through four innings, and then gave up a run in the top of the sixth, but got out of a jam and then in the top of the seventh put the Aggies down in order to close out the win. In the complete-game effort, he allowed just three hits and one run while striking out four.

Offensively, the two games were very different for the Lions, scoring six combined runs through the third and sixth innings in the opener of the series, and then scoring one apiece in the third and fourth in the second game of the series.

In the opener, Briarwood got on the board first when Wesley Helms hit a sac fly to right field, which drove in Tyler Waugh who reached on a walk to lead off the inning.

While the Lions didn’t have to use their bats to score the first run, that changed in the top of the fourth, as their bats finally woke up.

With one out on the board, Blake McKenna was hit by a pitch to put a runner aboard, which was followed by Briarwood’s second hit of the game when Eli Steadman doubled on a line drive to right field to put two runners in scoring position.

That seemingly helped grow the rest of the team’s confidence, as Christian Ferguson and Waugh laced back-to-back singles to each bring home a run and put Briarwood up 3-0.

During the next inning, Briarwood’s road the momentum and following a single from Sam Hamner, McKenna stepped to the plate and blasted a two-run homer over the right field wall that put the Lions on top 5-0.

Then, the last run of the game was scored with another extra base hit, as the hero from Monday’s game hit an RBI double to left field to drive home Bryce Perrien for the 6-0 lead, which was more than enough run support for the impressive team-effort on the mound.

The second game was, however, much more closely contested.

While the game was scoreless through first inning like the first game, Briarwood was unable to pull away this time around.

The Lions did, however, take a slim lead in the third and fourth with one run apiece, before holding on for the victory.

Similar to the first game, Briarwood picked up a hit in the first inning, but didn’t string together any success until the third.

Following Waugh being hit by a pitch to lead off the inning and an out being recorded on a sac bunt from Perrien, Parker Hutson and Helms hit back-to-back singles, the second of which was an RBI single driving home Waugh for the 1-0 lead.

After a quiet inning in the top of the fourth, the Lions came back to the plate in the bottom of the fourth ready to add to the lead.

Two quick outs were recorded, which made their chances look slim at scoring, but a single from Steadman during the third at bat gave the Lions some life.

Ferguson then stepped to the plate and on the second pitch he saw drove a fly ball to right field that the right fielder had trouble handling, which allowed it to drop.

With two outs in the inning, Steadman was running on contact, and once the ball hit the grass, he was already flying around the bases, which allowed him to score all the way from first to put the Lions up 2-0.

That smart base running and run became key later in the game.

Through five innings of play, the Aggies had picked up just one hit, but in the top of the sixth they were able to string together back-to-back singles to lead off the inning, which put McKinney in trouble for the first time in the game.

He, however, responded in a big spot.

While he gave up a run on a sac fly, he got out of the jam with three consecutive outs, and left the inning with the lead still intact at 2-1.

After a quick bottom of the sixth, McKinney got to come back out for the top of the seventh to try and put the game away.

Quickly getting back on the mound seemed to help, as McKinney forced a ground out, a fly out and another ground out in just nine pitches to send the Lions to the state championship series.

In game one of the series, Briarwood was led by Steadman with a 2-for-2 game at the plate as well as two walks. McKenna went 1-for-3 with two RBIs, while McKinney, Ferguson and Waugh all had one hit with one RBI. Perrien and Hamner both picked up hits as well, while Helms added an RBI.

Helms led the way in game two going 2-for-3 with an RBI, while Perrien, Hutson, McKenna and Steadman all had hits as well.

In their last trip to the championship series in 2009, the Lions finished runner-up after winning game one 2-1 before losing games two and three 8-3 and 4-0, respectively.

Since starting the season 0-11, Briarwood has gone 18-3 to earn this spot, and will now look to take down Springville to cap off the most special season in program history.