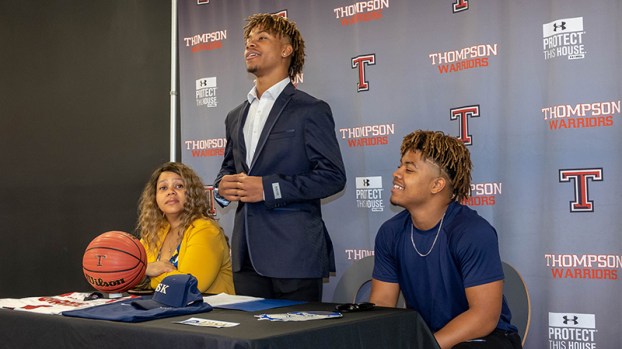 “One thing that jumped out about Matt in particular was when he said ‘Coach, I’ll do whatever it takes to play college basketball. That’s my goal, that’s my dream.’ A lot of people use those words, but one big difference I’ve seen in Matt is that he didn’t just say that, he showed that he wanted to play college basketball,” Powell said. “That’s all culminated today with this unbelievable experience that he gets to go through, and I couldn’t be happier for him. He’s been a great teammate, he’s been a hard worker, he’s been relentless in pursuit of the goal he expressed to me. I’m proud of you, and I’ve told you that a bunch of times.”

Hector realized his goal on the morning of May 10, when he signed a collegiate scholarship with Fisk University in Nashville, Tennessee, while surrounded by friends, family members, teammates and supporters in the THS cafeteria.

“First, I want to thank God for giving me the opportunity to compete at the next level. I want to thank my coaches for pushing me to be better every day on and off the court,” Hector said. “I want to thank my beautiful mom and my brother, David, who’s been with me every step of the way. Without them, I don’t know where I’d be.”

Hector played a pivotal role in the Warriors’ successful 2018-2019 season, during which THS posted 21 wins and a trip to the Sweet 16.

“From a coaching perspective, knowing you’ve got a student-athlete who is going to work very hard, not get into trouble in the classroom and you don’t have to worry about his grades, that’s a relief for a coach. It seems like every time he had the opportunity, he stepped up to the role and helped his teammates win. He played a very big part in our 21-win season and going to regionals.”