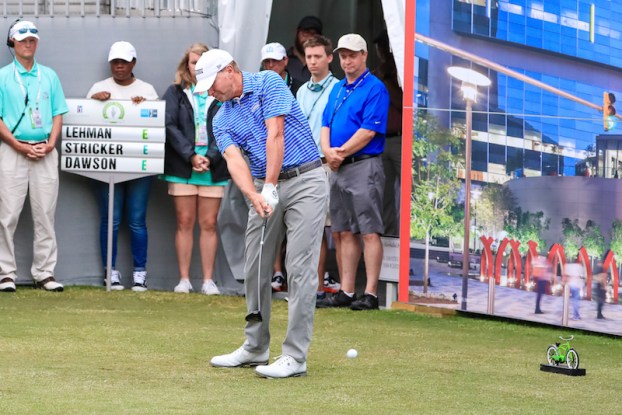 Steve Stricker will take a two shot lead into the final round of the Regions Tradition, but several top players are just behind including two-time champion Bernhard Langer. (For the Reporter/Dawn Harrison)

Stricker leads by two over crowded leaderboard heading to final round

HOOVER – Steve Stricker went into Saturday’s third round of the Regions Tradition with a two-shot lead, and at the end of the day, that lead was still intact, but now, the leaderboard is stacked behind him with seven players within five shots of the, and three in a tie for second two back.

After battling back from a slow start that saw Stricker 1-over on the front nine, he battled back with three birdies on the back side to shoot a 2-under 74 on what was a tough day for many.

“Yeah, I got off to a slow start,” Stricker said. “There are some good holes to start with and I hit some indifferent shots. Didn’t handle the situation very well. Hopefully I can do better with that tomorrow. But stayed patient and was able to birdie the par 5s on the back.”

This marks the fourth time Stricker has led or co-led going into the final round, but there are several big names in hot pursuit of Stricker, including two-time Tradition champion Bernhard Langer, who won in 2016 and 2017, as well as David Toms and Billy Andrade.

Langer is the most notable because of his consistency in this tournament having won twice in the last three years and posting eight top 10 finishes in the event.

Every time, he seems use three consistent rounds before pulling away on Sunday, and to this point, he has shot rounds of 69, 67 and 68 to get to 12-under and two shots off the pace.

Langer was 2 under on the front nine and then made birdies on three of the first five holes on the back nine before giving one back at the par-5 15th and then finishing with three pars.

“Yeah, I played very solid just all around, and it’s just a matter of making a few putts or not,” Langer said after his round. “Had it going, 5 under after whatever, 13 or so. Then missed a couple of opportunities and made a really bad bogey. I mean, there’s good bogeys and bad bogeys, and 15 was horrible after a good tee shot, bad layup and then downhill from that point onwards.”

But despite the ending to his round, Langer has confidence in himself at a course he’s comfortable on, as he looks to chase down the PGA Tour Champions’ first major of the season.

“Well, I love this golf course and I’ve been playing solid golf even last week,” he said. “Last week I didn’t make many putts, I finished 15th or whatever. This is a golf course where I’ve done well on, I know how to play it and it’s just a matter of executing and then hopefully rolling in a few putts. The greens are beautiful, so there’s no excuse. It’s just a matter of hitting the right putt on the right line.”

Also in a tie for second with Langer is Toms, who shot a 2-under par round of 70 to follow his two 67s in the first two rounds.

Toms was consistent for much of the day with 13 pars throughout his round. He finished the front nine 1-under with one birdie, and closed his rounds with two birdies and a bogey on the back nine.

“It was a pretty good day for scoring,” Toms said. “I just — nobody in our group really got hot, so still take it. We all played pretty solid and within striking distance. That’s kind of what you want come Sunday afternoon. Right there, just have to shoot a low one tomorrow.”

The final of the three players tied at 12-under is Billy Andrade, who shot a 3-under 69 to break 70 for the third consecutive round. He and Langer are the only two that have shot in the 60s in all three rounds of the tournament this week.

Andrade had one of the more consistent rounds of the day playing a solid round that featured three birdies and 15 pars. He birdied two of the first three holes and then reeled off 13 consecutive pars before another birdie on 17.

“Well, I’m in a good position,” Andrade said. “I didn’t make a lot of birdies today, I made three. I had a lot of chances and I just got to give myself chances tomorrow, see if I can get a little hotter with the putter, and if I can, I have a good chance.”

Behind those top four players are both Tom Byrum and Paul Goydos at 10 under in a tie for fifth, while Paul Broadhurst and Scott Parel are at 9 under.

The final round of the tournament is set for a two-tee start on Sunday at 7 a.m. with the final group scheduled to go off at 9 a.m. to beat scheduled bad weather throughout the day.

By ALEC ETHEREDGE | Sports Editor HUNTSVILLE –  After giving up two unanswered goals in the final 10:36 of the... read more