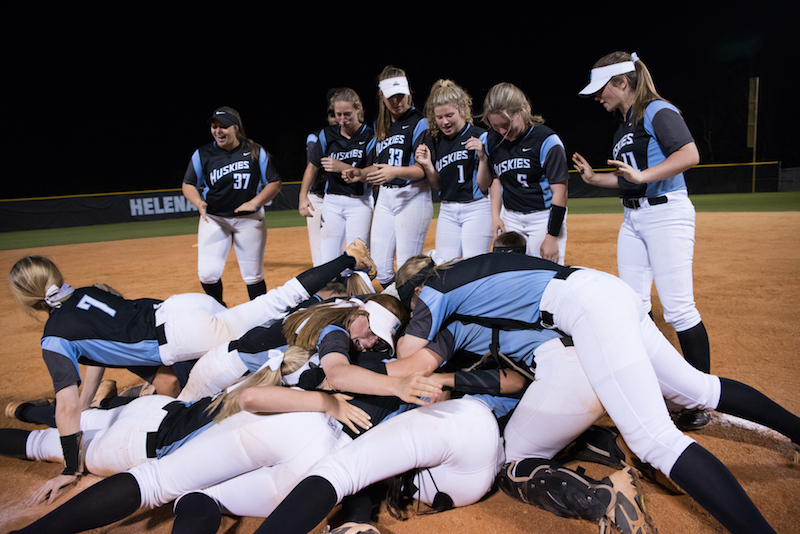 Helena is heading to the state tournament after going 3-1 in the East Central Regional May 9-10 to claim a qualifier spot. (File)

OXFORD – The Helena Huskies are heading back to Montgomery to compete in the Class 6A softball state tournament after finishing with a 3-1 record in the East Central Regional the week of May 6, to grab one of the two coveted qualifier spots.

After defeating Stanhope Elmore 10-7 in round one of the Regional May 9, the Huskies went on to defeat Hillcrest 4-2, suffered an 11-0 shutout loss to Brookwood and bounced back to defeat Wetumpka 15-1 to claim the second qualifier spot.

Below are recaps of Helena’s final three games of the East Central Regional:

Two late insurance runs and a solid pitching performance by Helena’s Avery Barnett were enough to give the Huskies a 4-2 victory in the second round of the Class 6A East Central Regional.

Helena jumped out to a 2-0 lead in the top of the third inning on a two-out RBI double by Peyton Wilkins and an RBI single by Megan Fortson.

Hillcrest responded in the bottom of the fourth inning on a sacrifice fly to score its first run of the game to cut Helena’s lead to 2-1.

The fifth and sixth innings were quiet for both teams, but in the top of the seventh inning Helena got some breathing room, thanks to four hits and two runs in the inning.

Kelsi Bargman got the inning started with a lead-off double, and Julia Wilkins followed with a bunt single to put runners at the corners with no outs.

After a strike out, Chaney Handley stepped to the plate and hit an RBI single to make it 3-1. Helena’s final run in the game came off a Peyton Wilkins RBI single to score Bargman to extend the Huskies’ lead to 4-1.

With a three-run cushion, Barnett stayed in the circle to attempt to get the final three outs to preserve the win for Helena.

After starting the bottom of the seventh inning with a strike out, Barnett allowed two singles that led to a run scored, but the Huskies’ lead was never in jeopardy as Barnett ended the game with her eighth strike out.

Barnett got the win after pitching a complete game on just 91 pitches. She allowed just one earned run on seven hits.

For the first five innings, neither team could push a run across, but that quickly changed in the top of the sixth inning as Brookwood exploded for an 11-run inning that all but ended Helena’s chances of a victory.

In all, Brookwood finished with eight singles and two doubles in the inning as Helena also surrendered three walks in the frame. Even more impressive was that nine of the 11 runs in the inning for Brookwood all came with two outs.

With the 10-run rule in effect, Helena needed to score a few runs in the bottom of the sixth inning. After a lead-off single by Handley, the game came to an end after a pop out and two ground outs.

Helena finished with just two hits as a team while Brookwood scored 11 runs on 12 hits.

After falling to Brookwood, Helena moved to the finals of the loser’s bracket setting up a crucial game with Wetumpka on Friday, May 10. The winner would secure a spot in the state tournament while the losing team would see its season come to an end.

In the end, it was Helena that was up to the challenge as the Huskies scored a total of 15 runs on just nine hits to take the 10-run rule victory in five innings.

After jumping out to a 2-0 lead, Helena’s Bargman capped off the top of the first inning with a three-run home run to give the Huskies a quick 5-0 lead.

One inning later, Helena took advantage of several walks and put up seven runs in the top of the second inning to take a big early lead.

Up 6-0, Helena’s Emily Crowe cleared the bases with a three-RBI double and an error on Wetumpka made the lead 10-0. The final two runs of the inning came on an RBI single by Julia Wilkins and an RBI triple by Haley Morris.

Helena’s final three runs of the game came in the top of the fifth inning as White hit a two RBI triple and Sara Ezekiel capped things off with an RBI single.

Helena’s Bargman, Crowe and White all had at least three RBIs in the game, with Crowe leading the way with four. Crowe was 2-for-2 with four RBIs and two runs scored.

After finishing as a regional qualifier, the Huskies will now compete against seven other teams to try and take home a state championship in Montgomery later this week. A full schedule with game times will be announced soon.