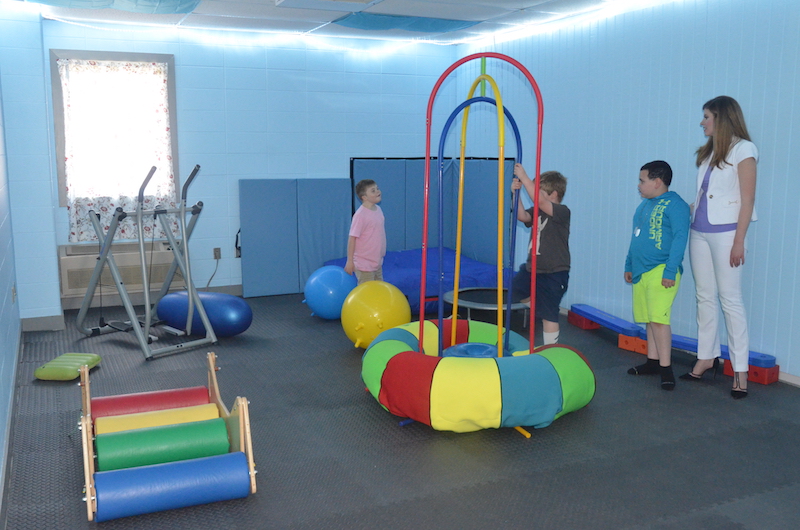 Isabella Powell, who spearheaded a project to improve the sensory rooms at Shelby Elementary School, talks to students as they explore the equipment in the "active" room during the grand opening on May 6. (Reporter Photo/Emily Sparacino)

SHELBY – Two new sensory rooms available for students with special needs at Shelby Elementary School were unveiled to school staff and visitors May 6.

The rooms, which replace the school’s former sensory room, contain equipment and other upgrades that will enhance students’ experiences as they prepare to reenter their regular classrooms.

Miss Camellia 2019 Isabella Powell, 22, of Calera spearheaded a project to create the new sensory rooms – one “active” room and one “calm” room – as part of her social impact initiative, “Gimme-a-Break – Providing Sensory Rooms for Children with Special Needs,” for the Miss American Organization.

“I want to thank Isabella for choosing our school,” SES Principal Stacy Aderholt said. “It has made a tremendous difference in our kids. They are ready to learn when they leave.”

Powell, who attends the University of Alabama, said she became passionate about creating sensory rooms at schools across the state after her younger brother, David, was diagnosed with a special needs brain disorder called Reactive Attachment Disorder Syndrome, or RADS, which results in many of the same behavior patterns as autism.

Powell said three out of 20 children have Sensory Processing Disorder, diagnosed or undiagnosed, which can lead to sensory overload for children like her brother in a regular classroom setting.

“It’s almost like fire shooting in their brains 24-7,” Powell said.

Through sensory therapy, Powell said she and her parents, Charles and Katherine Powell, saw “tremendous improvement in her brother’s behavior and grades.

The change gave her the idea to start a sensory room at David’s school, Calera Intermediate, nearly a year ago. Her second project took place at Pinecrest Elementary in Sylacauga.

SES is the third school at which Powell has worked on a new sensory room.

After talking with administration at each school and assessing their needs, Powell raises money for the rooms and compiles a list of materials needed for them, such as foam flooring, alternative lighting, light blue wall paint, weighted vests, a sound machine and tactile activities.

For the sensory rooms at SES, Powell held a fish fry at First Baptist Church of Columbiana and a bingo night at the Columbiana Senior Center, raising about $2,000 total from the two events. To reach the budget goal of $3,000, the Shelby Elementary PTO made a donation of $1,000.

Once the money had been raised, Powell organized a team of community volunteers to assemble the room, she said.

“She has put in many, many hours, and we are so grateful,” Aderholt said. “She’s really done a phenomenal job. It has been a huge improvement to our school.”

Powell said Aderholt and her staff have supported the project from the start.

“It was a blessing,” Aderholt said, adding her teachers had been working on grant applications to improve the former sensory room when Powell pitched her idea to them. “We could never have turned it into this with the funds we could secure. She has enhanced it so much.”

SES special education teacher Chanda Jennings said the new rooms not only benefit current students, but they also “will impact many kids down the road.”

“I’ve been so amazed at how this has blossomed in the last year,” Powell said. “I love this project. This is not something I’m checking off my list.”