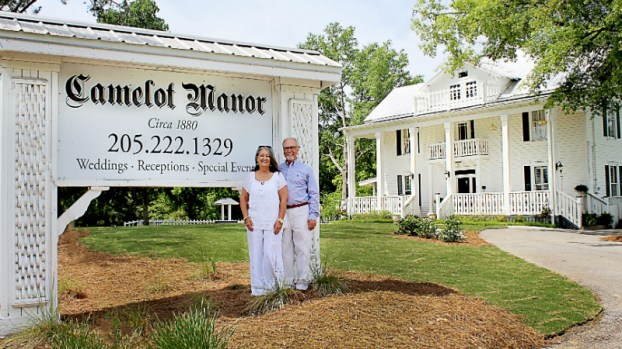 Charlot, left, and Gene Denny are the new owners of well-known1880 Plantation home in Westover. (CONTRIBUTED)

As many of us have, new owners Gene and Charlot Denny had visited the old 1880 Plantation home in Westover over the years and dreamed of owning it. Now, as of a few months ago, their dream has come true.

They immediately went to work redecorating to make it the vision they had for the old house.

“From the moment I stepped inside I knew I wanted to paint the interior white. I wanted to give it a fresh new look while keeping the historic charm. Gene gave full freedom with the decor. Our plan was to continue to be an event space with the focus on weddings. Having been a wedding photographer in the past, I knew what the color change would do for bridal photos,” Charlot said.

Gene went to work on the paint and repairs while Charlot gathered the items for decorating. They had flipped several houses in the past with great results and said: “We work great together as a team. We work hard, but the end result is always rewarding.”

While making the decisions with all the tiny details that had to be addressed, they wrestled with one big question: What would be the new name of the plantation? They tried out several names, even asking friends and family to vote on a few names. “Suddenly it came to me,” Charlot said . The new name would be “Camelot Manor.”

She grew up in the Hoover/Bluff Park area in a neighborhood called “Camelot Woods” where her father still lives today, so that name has always had a special place in her heart. Add to that her fascination with the Kennedy’s of Camelot. President John F. Kennedy and his wife Jacqueline Kennedy coined the phrase Camelot to reference their lives while in office.

“I had heard it said that Jack and Jackie were America’s only king and queen. Combine this with the original story of King Arthur of Camelot with all its romance. While thinking on all this I laughed at the idea that my husband’s middle name was Arthur and how I had always called him my knight in shining armor. With this final thought the name was sealed. It would be Camelot Manor.”

They wanted to create a place where the bride and groom could feel like royalty , like king and queen on their special day. The bride has the entire upstairs as her bridal suite while the groom’s room is designed after the famous “Knights of the Round Table.” The new décor and fresh look create an unforgettable experience for the couple to begin their new lives together.

Charlot likes to quote a line form the song in the musical “Camelot”: “In short, there’s simply not a more congenial spot for happily ever-aftering.”

By Connie Nolen / Community columnist “Do you guys think we should decorate her room in black streamers and balloons... read more