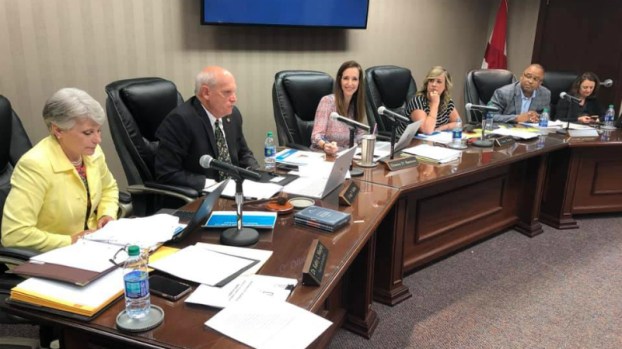 The Hoover Board of Education re-elected President Craig Kelley and Vice President Deanna Bamman at its meeting on Tuesday, May 14. (CONTRIBUTED)

HOOVER – The Hoover Board of Education recognized retirees, received an audit report, re-elected its president and more at a meeting on Tuesday, May 14.

Twenty-three employees with at least 25 years of service are retiring from the school system and were recognized by the Board.

The Board also approved a contract for a new Chief Schools Financial Officer. The contract was approved despite Board member Kermit Kendrick’s request for more time to review the contract before voting.

The Board then received an audit report of the school system from Fiscal Year 2018. The audit report included an “unmodified” opinion, according to the auditors who presented their findings to the Board.

Among the items noted in the presentation were that the system’s revenues were down slightly from the previous year due to receiving a one-time payment of about $8.9 million from Jefferson County during the previous year.

Expenditures were up from about $132 million to about $139 million because of salaries, hardware investments and capital projects.

In its last action of the evening, the Board re-elected President Craig Kelley and Vice President Deanna Bamman to the same positions.

No other nominations were made, and Kelley and Bamman were both approved unanimously.

“Any one of these Board members could step forward and run this Board,” Kelley said about his colleagues.