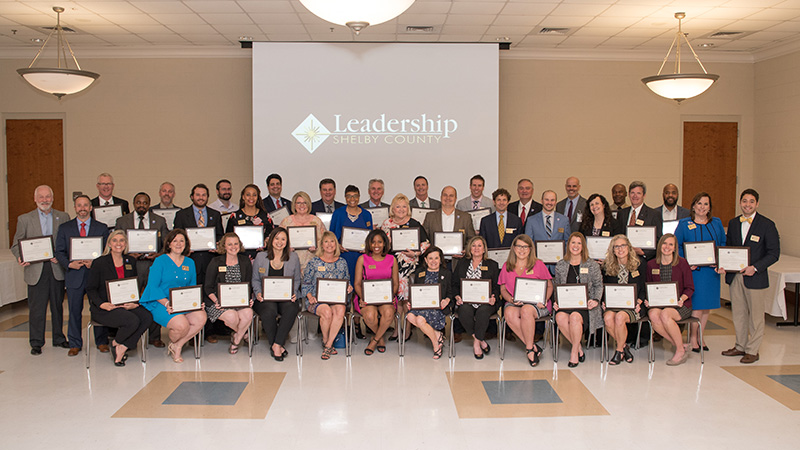 The Leadership Shelby County class of 2019 celebrated its graduation during a May 14 ceremony at the Jeff State Hoover-Shelby campus. (Reporter Photo/Keith McCoy)

HOOVER – The graduates of the 2019 class of Leadership Shelby County will leave a lasting impact on American Village, local children in need and unsung community heroes, as they unveiled their yearlong service projects during a May 14 graduation ceremony.

During the ceremony, which was held at the Jefferson State Community College Hoover-Shelby Campus, the 40-member LSC class of 2019 celebrated the end of a several-month journey through the program.

Over the past several months, the class members learned more about many facets of Shelby County while working in three teams to develop and implement projects to increase the quality of life in the county.

“We thank you for going through this program. We know it’s a big sacrifice to give one day a month to learn more about the county, and to work on projects to benefit the county,” said 2017-2019 LSC Board of Directors President Tom Sanders. “These are three outstanding projects, and all three have an element of sustainability to go out and continue to impact the county after this initial rollout. I think that’s wonderful.”

The LSC graduates completed the following projects during their time going through the program:

-Group 1 enacted the “Hall of Heroes” program in Vincent, with plans to expand it to other schools throughout the county. Through the Hall of Heroes program, fifth-graders wrote essays nominating individuals in the community they identified as unsung heroes, and the Student Government Association at the high school narrowed the nominations down to the top five. The fifth-graders then chose one person – Angela Mitchell – to induct into the Hall of Heroes in March.

-Group 2 worked with the Alabama Veterans Shrine and Register of Honor at the American Village, which is seeking to serve as a repository for information on every veteran in the state. Over the past several months, the group has increased entries in the system by about 20 percent, and has helped spread the word about the registry to veterans’ groups across the state. During the graduation ceremony, group members also honored all veterans who were in attendance.

-Group 3 enacted Resource Discovery Shelby County, which seeks to connect school nurses and counselors in the Shelby County, Alabaster and Pelham school systems with nonprofit organizations offering services to children in need. In March, the group hosted a forum at the Shelby County Instructional Service Center to help identify the needs school nurses and counselors face. In September, the group will host a meeting to bring school professionals and local businesses and nonprofits together to help meet those needs.