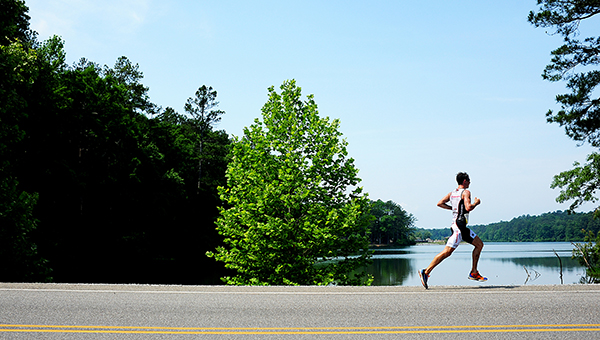 A project to improve roads and add bike/pedestrian lanes in Oak Mountain State Park is under way and is expected to be completed in October. (File)

PELHAM – Visitors to Oak Mountain State Park may experience slight traffic delays for the next few months as a road project is completed.

A project to improve roads and add bike/pedestrian lanes inside Oak Mountain State Park is under way and is expected to be completed in October, according to Chad Scroggins, Shelby County Chief Development Officer.

Wiregrass Construction was awarded the contract with a bid of $3.9 million. This project is the second phase of road projects to be completed at OMSP.

The project, which began in January, calls for road safety improvements and bike/pedestrian lanes to be added from the park’s North Trailhead parking lot all the way to the front gate, a total of about 7 miles, Scroggins said. The bike/pedestrian lanes will be 6 feet wide on each side of the road.

The first phase of the project, improving the road and adding bike/pedestrian lanes from the North Trailhead to the park’s back gate, was completed in spring 2018 at a cost of $2.3 million.

A third phase is still in the design and right of way acquisition stage, Scroggins said. Original plans for the third phase of the project included installing bike lanes and making road improvements on State Park Road from John Findlay Drive to Amphitheater Road. However, the scope of the project expanded.

A roundabout will be constructed to replace the four-way stop at the intersection of State Park Road and John Findlay Drive.

Safety on State Park Road and within the park has been a concern for many years, but plans for this project began to take shape in 2015 when the Alabama Department of Transportation first drafted improvement plans for road improvements.

“Once complete, this project will make the roads a lot safer, not just for drivers, but bicyclists and walkers, too,” Scroggins. “This will also connect the park to the city and help people get from the hotels to the park. A lot of the time, people at the hotels are there to attend events at Oak Mountain.”

Scroggins said the project is on schedule to be completed on time. He asked park users to be patient as upgrades are being completed.