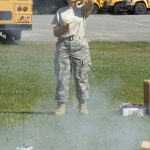 STEM is an acronym for Science, Technology, Engineering, and Mathematics and typically encompasses a vast array of subjects that fall into each area. The focus on STEM has become mainstream nation-wide in academic curriculums with the emergent recognition that learning needs be directly tied to the creation of technologies, the solving of real-world issues and jobs.

“Building rockets is not only fun for students but a great way to teach the fundamental processes of propulsion, Newton’s Laws of Motion and the physics of air and space travel,” said Major Stanley Murrell, teacher for the class, explaining these types of projects provide opportunities for collaborative learning because students work closely together.

Dr. Edwards implemented learning opportunities called LEAD at the start of this school year. Many of the teachers offered to teach or sponsor a subject matter of interest to them. Students were asked to sign up based on the subject matter and without knowing who would be teaching.  “We have a great talent pool at VMHS in our teachers. Creating an opportunity for teachers to share their individual talent while encouraging students to explore their individual area of interest, and learn at the same time, is smart teaching,” said Edwards.

“As a pilot, I was happy to find out we had students with an interest in aviation, so I offered to teach a STEM class using aviation related material,” said Murrell. Students spent the first part of the year studying basic aerodynamics and physics. “Once they had a basic understanding, we could expand their knowledge with hands-on learning.”

During the spring semester, The Civil Air Patrol provided a grant for the purchase of model rockets. After school on Wednesday, May 8, students were able to launch the rocket he or she built, and some of them were able to launch two or three times. Describing her experience, student Madeline Goss said, “We learned about how airplanes and rockets fly. This class helped me confirm my dream of becoming a pilot in the military.”

According to Murrell, some of the rockets flew to nearly 1,000 feet in the air before gently descending back down to earth under a tiny parachute. “We owe a special thank you to the Civil Air Patrol for the rockets and the launching pad,” said Murrell.  “Putting learning into practice makes such an impact.”

“I can’t say enough about Major Murrell, the after-school part was all him. He always goes above and beyond for the kids,” said Edwards.

The experienced Army pilot in Maj. Murrell came out when he described the goal for next year: “If we get to offer this class again next year, we will learn to fly drones, a flight simulator and radio-controlled airplanes.”

Teacher gets glimpse into life of first president (community column)

George Washington…his picture is on the dollar bill, he was the first president of the United States and a great... read more