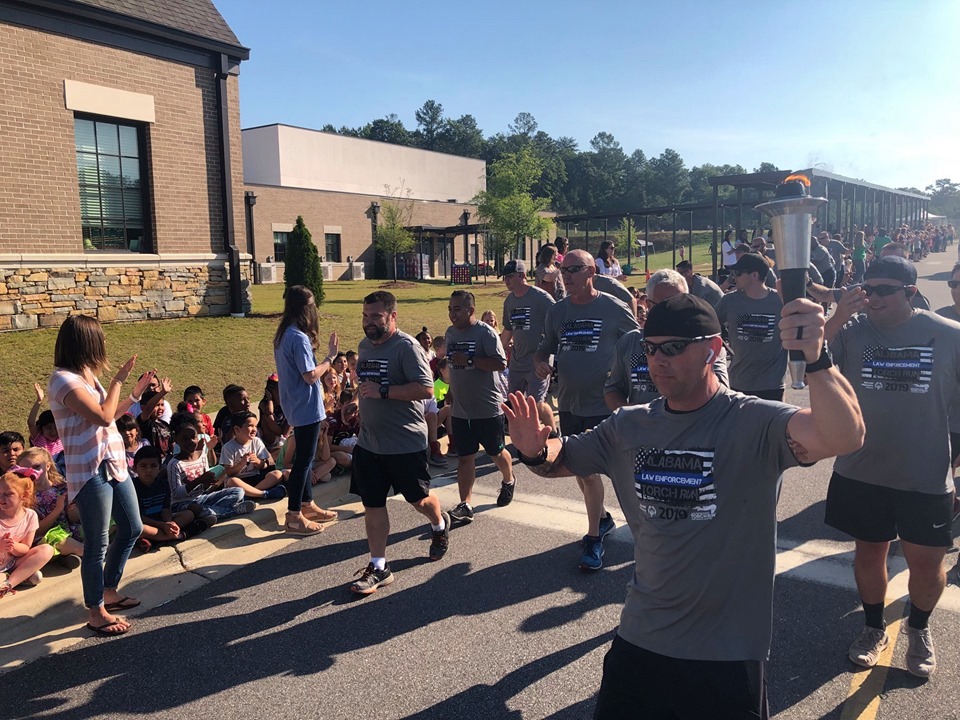 Students at Pelham Ridge Elementary cheer on area law enforcement as they participate in the Flame of Hope torch run for Special Olympics. (Contributed)

PELHAM – Law enforcement agencies from throughout Shelby County and beyond gathered at Publix on Huntley Parkway to participate in the annual Law Enforcement Torch Run for Special Olympics of Alabama as it passed through Pelham on Friday, May 17.

The Flame of Hope torch was carried through the city on the first leg of the run leading up to the statewide Special Olympics games that kicked off at Troy University the same day. From Pelham, the run went to Wetumpka, Montgomery and then to Troy. Some officers participate in each leg of the run, which is an awareness campaign for Special Olympics – a cause that Alabama’s law enforcement community has supported for years.

Last year, state law enforcement agencies raised $154,000 for Special Olympics of Alabama, and they’re on track to do even better this year, said Shelby County Sheriff’s Office Deputy Debbie Sumrall, who is also the state director for the torch run.

Throughout the year, various fundraisers, such as Polar Plunge, Tip-A-Cop, a golf tournament and more, help to generate money for the organization. Pelham started fundraising for the Special Olympics in 1986 and has been dedicated to the cause ever since.

Anyone with an intellectual disability can participate in the Special Olympics, Sumrall said.

“These games are so important to them because a lot of the time they don’t have opportunities to play sports and be competitive,” Sumrall said. “And it’s not just children participating in these games, it’s adults too.”

Pelham Police Chief Larry Palmer thanked Publix for sponsoring the event and offering refreshments to the law enforcement officers before and after the run.

“I just want to thank Publix for being a dedicated partner,” Palmer said. “Every time we have something, they are there offering their support. Publix raised about $10,000 of the $20,000 raised at the Polar Plunge.”

After the torch was lit, officers jogged up Shelby County 52 from Publix to Pelham Ridge Elementary School, where students stood outside cheering them on, and then back to Publix.

As the event ended, some officers got in their patrol cars and headed on to Wetumpka to continue the journey.