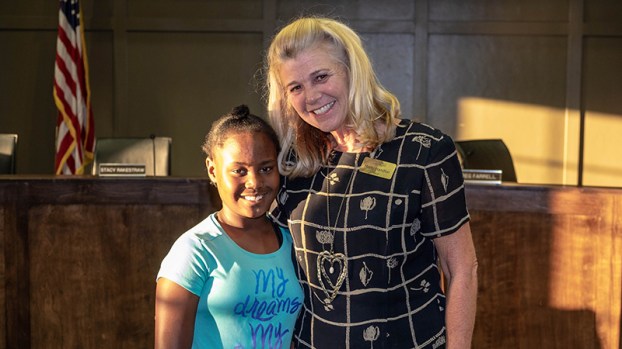 ALABASTER – A Thompson Intermediate School student represented Alabaster on a national level recently, as she beat out millions of other students to place second in the Elks Lodge Hoop Shoot contest in Illinois.

Nine-year-old Gaby Bradley recently advanced through the ranks of the Elks Lodge’s Hoop Shoot contest, which features more than 3 million children competing from across the United States.

From the regional competition, she advanced to Chicago, where she finished as the national runner-up after a double-tiebreaker round. At nationals, she hit 22 of 25 shots, and then hit nine of 10 in the double tiebreaker.

Bradley has been playing basketball since she was 4 years old, and she played in boys’ leagues in until last year. While playing with the Pelham Rec League, she led her team to its first championship game, and scored 76 of the team’s 103 points on the season, and assisted with 20 of the other 27 points.

She currently plays on the AAU Alabama Heat Girls Team, and she shoots between 50 and 100 practice shots at home every day.

During a May 20 Alabaster City Council meeting, Bradley earned a Challenge Coin and a proclamation from Alabaster Mayor Marty Handlon for representing the city well in the competition.

“She has made us proud, and represented the city of Alabaster very well. She won her local contest, her district contest and the state. She went to Chicago, Illinois, to compete in the national level, and she finished runner-up on the national level,” Handlon said. “Gaby, if you’re ever feeling like you aren’t a winner like you are now, I want you to look back on this and remember that you can do anything.”

By NEAL WAGNER / Managing Editor ALABASTER – Tractor trailers are now prohibited from parking in parts of the city... read more