Grad spotlight: Blankenship looks to a lifetime of serving community

ALABASTER – Evangel Classical Christian School senior Anna Blankenship is enthusiastic about whatever she is learning.

“While many students her age only look to be accepted into a certain program at a certain institution of higher learning, Anna’s desires go beyond those immediate in nature,” according to her nomination letter. “Her desire is to participate in a lifetime of active service to her community, locally and beyond, and every pursuit, academic or otherwise reflects this ultimate goal.”

Blankenship loves languages. This love started in the third grade when she began taking Latin courses.

This journey has led her to win gold and silver medals on the National Latin exam, be a semi-finalist in the National Phaedrus Latin Fable Composition Contest, and place first in the Alabama Junior Classical League’s Latin Oratory Competition for two years.

She earned three college credits at the University of Dallas’s “Latin in Rome,” summer program and attended the Conversational Latin Seminar in Lexington, Kentucky, for two summers.

Blankenship has also served as the president of the Latin Club, was in the National Junior Classical League, and a member of the Beta Club as well as the missions club.

“Anna excels across the academic spectrum, not just in languages,” according to her nomination letter. “Anna has a heart for service and it is clear in everything she does for her classmates, younger students, and teachers. She is well-rounded, active in drama, art, and a talented figure skater. She is involved in several clubs, is a tutor to younger students, and even started her own soap-making and lip-balm making business.”

Blankenship said her parents were instrumental for making sure she had a wonder and curiosity for the world and God’s creation.

“I am really grateful for that,” Blankenship said. “Since coming to Evangel, it was really cool because the teacher’s had that desire for the students as well. It spurred me and other students on to love learning in general.”

Blankenship said the best piece of advice she has received is to raise up Christ because nothing else matters.

The most rewarding thing that happened to her over the past four years is the relationships she made with people her age, younger students and the teachers and faculty.

Due to her love of learning and languages, Blankenship plans to take a gap year after graduating in May and live in France for a year.

While in France, Blankenship plans to be an Au Pair, and take French classes.

Blankenship is the daughter of Brandon and Donnalee Blankenship. 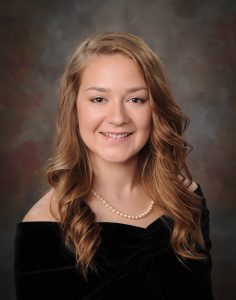