ALABASTER – Thompson High School seniors Ali’yah and Sha’liyah not only share graduation day and the honor of being valedictorians for their school, but they also share the most common title: twins.

The Johnson sisters, 17, have both accomplished many things during their time in high school.

Ali’yah took part in the school’s Education Academy in preparation for a career in a biology-related field.

Ali’yah said her favorite part of high school has been the Friday night lights, and being with the band and her friends cheering on the football team.

“I walked around with a metronome ringing my ears, but I didn’t mind because I got to travel and go to competitions with the band, which was really fun,” Ali’yah said.

One of her most rewarding moments in high school was being chosen as a Horatio Alger Scholar and going to the conference in Washington D.C.

“I got to meet Justice Clarence Thomas, which was really exciting,” she said.

Ali’yah said her greatest achievement was being named to the second round for the Hosa competition.

“It was the first competition I participated in that really meant something to me because I was competing with a lot of veterans and smart people, but I was shocked when I saw my name on the list for top six,” she said.

Her favorite subjects are biology and history. Biology because she considers it cool to learn about how organisms have a purpose that inherently assist other organisms. History because of all of the wonderful teachers she has gotten to know during high school, that helped make the subject painless and interesting.

After graduating in May, Ali’yah plans to attend the University of Alabama with plans to go to medical school.

One of her favorite parts of high school was participating in the marching band, especially during the ‘BananaSZN,’ when the school was undefeated and beat Hoover.

“One of my most rewarding things during high school was one day whilst practicing my music, my band director Mr. Bubbet came up to me and said that I was doing a good job and he was happy that I was a part of the program,” Sha’liyah said. “That made me feel good because when I was a freshman I was not good at all.”

One of her greatest achievements has been leading her peers in the marching band, and she enjoyed being picked as a co-section leader.

Sha’liyah considers physics her favorite subject because she enjoys math and applying math to problems.

“I am also a visual learner, so to see laws in action really helps me to learn,” Sha’liyah said. “Also, my teacher, Mr. Furman, is really funny and very cool and I enjoy going to his class every day to learn new things.”

Sha’liyah plans to also attend the University of Alabama in the fall. She would like to work for a company that build prosthetic limbs for people.

“Eventually, I want to write and direct a play or a movie. I have a lot of random things that I want to do and I can’t wait to start,” she said. “For one, I would love to start a non-profit to help elderly people get accommodations such as electric stairs, walk-in tubs, etc. I want to raise money for less fortunate school’s band programs because I feel like the band has really gotten me through high school and even though I probably won’t pursue a career in music, what I have learned and the values and community that I have gained from band really helped me through high school and will stick with me for the rest of my life so I hope to share this activity with other schools too.”

Ali’yah and Sha’liyah are the daughters of Sherry and Anthony Johnson. 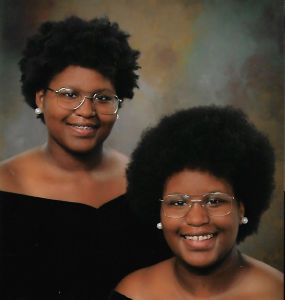 Ali’yah and Sha’liyah Johnson are twin sisters who both earned the designation of valedictorian in this year’s Thompson High School graduating class. (Contributed)

FROM STAFF REPORTS ALABASTER – For the second year in a row, Creek View Elementary School in Alabaster has won... read more