“He thrives on a challenge and seeks to make wise and logical decisions in all he does,” according to his nomination letter. “Trevor would be an asset to any organization of which he is a part and he is well qualified for the rigors of higher education.”

Russell, 18, said he has been involved with Evangel Church for almost his whole life, but joined ECS last year.

“In my free time, I enjoy playing soccer, practicing guitar and and working on computers,” Russell said. “Overall, my favorite part of high school was getting to meet the people at ECS, making new friends and opening up new possibilities.”

Russell has maintained an unweighted 4.0 GPA while pursuing the highest level of academic courses available to him.

Following his sophomore year, Russell transferred from the school he loved in order to pursue engineering courses as well as dual enrollment and AP course opportunities.

He received a perfect score of 36 on the ACT, and was named a National Merit Finalist.

In addition, Russell has also played soccer for both Evangel and Alabaster’s club teams, participated on the ECS Robotics team for the past two years and was involved with the National Homeschool Honor Society.

Russell said one of the most rewarding things during high school was when the Robotics team placed first in the Regional Competition of BEST Robotics.

“It was amazing to see everyone’s hard work coming together that weekend, especially after the tough time we had at the competition the previous year.”

Russell said he enjoys science, especially physics, because he enjoys seeing how mathematical concepts apply to the real world.

After graduating in May, Russell plans to attend the University of Alabama and major in computer science. He likes the idea of being a software developer one day.

Russell is the youngest of three boys, and the son of Lee and Amy Russell. 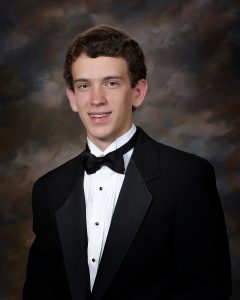 By EMILY REED / Special to the Reporter ALABASTER – Kingwood Christian School senior Seger Bayer is described as the... read more