The Shelby County Sheriff's Office is warning the public of counterfeit $100 bills possibly circulating in the area. An arrest was made on May 21, as a result of a recent investigation. (Contributed)

The Shelby County Sheriff’s Office is warning citizens of counterfeit money possibly being circulated in the area, as one arrest has been made as a result of the investigation. 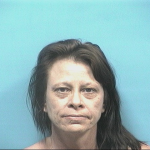 According to a press release on May 23, The Shelby County Sheriff’s Office is alerting the community to counterfeit $100 bills possibly in circulation.

“These counterfeit bills all bear the same serial number, LB45440078L, and each bill bears apparent Asian characters stamped on the rear. The bills otherwise appear to resemble real U.S. currency in look and feel,” the release read.

The Shelby County Sheriff’s Office said at least one other local agency has reported currency of a similar description being recently tendered at a local business. Local merchants and residents are urged to closely inspect any $100 bills in their possession. If any bills matching this description are located, SCSO urges citizens to notify a local law enforcement agency and to not attempt to further circulate the bills.

This search warrant led to the seizure of $40,200 in counterfeit U.S. currency, as well as drugs and drug paraphernalia.

For information on current or recently released inmates from the Shelby County Jail, visit Shelbyso.com.

Anyone with additional information about this crime should contact the Shelby County Sheriff’s Office directly at 669-4181, the secret witness line at 669-9116, or through the website.

FROM STAFF REPORTS MONTEVALLO – On July 4, 2012, ground was broken for the National Veterans Shrine at the American... read more