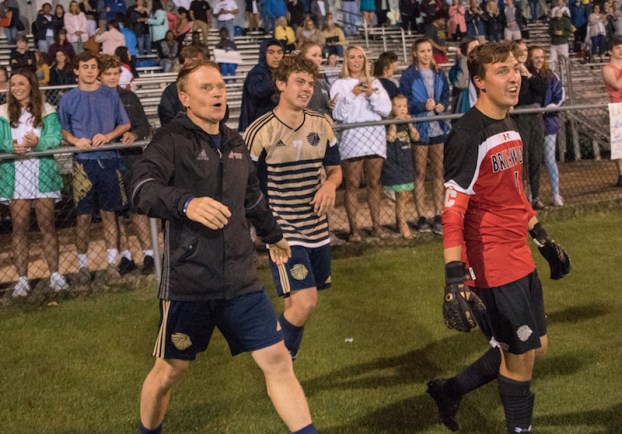 Briarwood head coach Shawn Brower led the Lions to the 2019 Class 4A-5A State Championship to earn the coach of the year honor in Shelby County. (File)

The 2019 soccer season was another historic one that left us amazed by the amount of talent in this county after five teams from the area advanced to the Final Four and two went on to bring home state championships—the Westminster girls and Briarwood boys.

While the players are the ones that went out every night and put in the work to lead their teams to greatness, the success wouldn’t have been possible without buying into what their head coaches were preaching throughout the season.

Shelby County’s coaching depth is what makes it the most soccer-rich area in the state, and a big reason why so many teams are able to sustain success year-after-year.

It makes deciding on a Shelby County Coach of the Year an extremely difficult task, as several are also regarded as the best in the state.

During the 2019 boys soccer season, Pelham’s Patrick McDonald led his team to the Final Four for the fourth time in the last five years; Westminster at Oak Mountain’s Christian Adkins led his team to its second consecutive Final Four after last year’s breakthrough championship; Oak Mountain’s David DiPiazza had the Eagles ranked as a top-two team the entire season before a difficult loss to eventual state champion Hoover in the playoffs; and Chelsea head coach Lee Miller led the Hornets to the Class 6A Area 8 Championship before a heartbreaking loss to Pelham in the playoffs.

In the postseason, three of those four teams were eliminated by one goal while one was eliminated by two goals, showing just how close they were to punching a ticket to the Final Four or a state championship as well.

One coach, however, was able to survive and lead his team to the most coveted thing in Alabama high school sports—a blue map.

Briarwood head coach Shawn Brower led the Lions to a historic season featuring a postseason run of five consecutive wins by a combined 27-2 to claim the Class 4A-5A State Championship.

While it marked Briarwood’s fifth state title in school history, it was the Lions’ first since 2013 and gave Brower his first as the team’s head coach, earning him the award of 2019 Shelby County boys soccer Coach of the Year.

It wasn’t just the state championship that was impressive for Briarwood this season, but what they were able to accomplish as a team during the regular season.

Early in the year, the team bought into the goal of breaking the state record for most consecutive shutouts, and with a shutout of the Thompson Warriors on March 13, the Lions picked up their 10th in a row to set the state record.

“They never set out to do that,” Brower said. “They came to me at eight in a row and said ‘Coach you know the record is 10 right?’ I had no idea, but when they told me they asked if they should go for it. I was like ‘Well yeah, I mean go for it and if it happens it happens.’

“It was a sweet thing because a lot of time the defenders don’t get the credit they deserve. So they took that as a battle within the season.”

A game after that record-setting performance, however, Briarwood picked up its first and only loss of the season, but that’s where Brower said the season really turned in their favor.

It was a 1-0 loss to Albertville, which ended up as their only loss of the season as that one goal kept them from finishing undefeated.

“Many times, I have thanked the Lord for that one loss,” Brower said. “Last year, we won 21 in a row and I had set up a schedule where I thought we would lose several games, but we won them. So by the time we got to the Final Four, I think we had that feeling of we can’t lose but they did. So that loss to Albertville was the best thing that could have happened.

“Albertville, to their credit, they celebrated and picked a player up on their shoulders, and I said ‘Hey, take a look. Let’s not let that happen again.”

And the Lions didn’t.

From that point forward, Briarwood went on to win 11 of their final 12 games of the season with a 3-3 tie against Baylor School being the only non-win during their state championship run.

The championship victory isn’t the first sign of success we’ve seen from Brower as Briarwood’s head coach, as he led the team to the state championship game each of the previous two years as well.

Both of those games against Randolph School, however, ended in losses, but during the Lions’ third straight trip to the title game, they got redemption and finally claimed the blue map with a 5-0 victory against Springville.

The playoff run featured comeback victories against both John Carroll in the second round and Montgomery Academy in the semifinals. Against Montgomery Academy, it was a perfect 5-for-5 in PK shots that led the Lions to a berth in the state championship where they finished off a spectacular season.

Brower said the crazy aspect of that semifinal victory is that the team had never even made all five PKs in practice, but that just showed this team was a team of destiny.

To weather two heartbreaking seasons that saw players pour everything they had into the team to only come back and lose, it was all made worth it in 2019. To keep their belief and focus for a third straight year after those losses is just part of the reason Brower is more than deserving of this year’s coach of the year honor.