COLUMBIANA – A Columbiana man charged with capital murder in 2015 has pleaded guilty to the felony charge.

In a pretrial hearing May 28, 23-year-old Demarcus Lamar Means pleaded guilty to the murder charge related to 18-year-old Haleigh Green’s death in 2015, and was sentenced to life in prison with 1,400 days of jail credit, according to court documents. 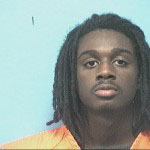 Means’s plea agreement states he must pay all court-ordered costs, including $50 to the Crime Victims’ Compensation Fund, $30 to the Jail Housing Fee and restitution of $1,186.48 to the Alabama Crime Victims no later than May 28, 2050. The agreement also states Means must avoid initiating contact with Green’s family.

The agreement was approved by Green’s family and the Shelby County Sheriff’s Office.

Means’s guilty plea comes nearly four years after he was arrested and charged with allegedly shooting and killing Green in July 2015. The initial murder charge was later upgraded to capital murder, which carries the possibility of the death penalty upon conviction.

Then-Shelby County Circuit Court Judge Dan Reeves denied Means’s youthful offender application filed in September 2015 after hearing arguments and testimony in a closed hearing Dec. 16, 2015. During his arraignment, Means pleaded not guilty to the capital murder charge, and the case was headed for trial following the discovery period. Motions for change of venue and appointing additional counsel also were filed in September 2015 for Means, who has been held in the St. Clair County Jail on no bond.

In 2017, Means’s attorneys filed a request for the death penalty to be barred in his case, citing a psychological evaluation of Means performed by psychologist Ron Meredith as evidence that Means is “intellectually disabled.”

By NEAL WAGNER / Managing Editor Local residents looking to learn some of the basics of aircraft and flying will... read more