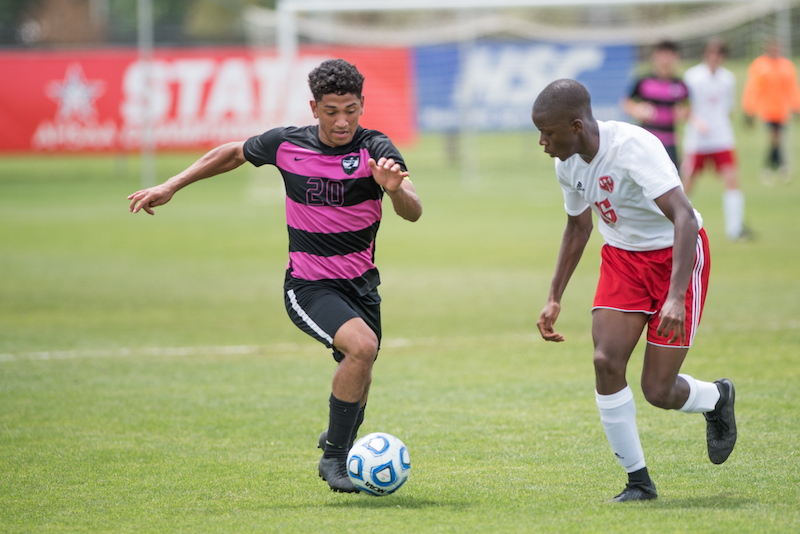 Pelham's Irvin Rodriguez was one of many to be named to the 2019 Boys' Soccer All-County Team after a remarkable season by several in Shelby County. (Reporter photo/Keith McCoy)

One of the most soccer-rich areas in Alabama, Shelby County’s boys soccer teams had another remarkable season in 2019 with three teams making it to the Final Four, one state champion and others spending time highly ranked throughout the season.

Briarwood’s boys were the only ones to bring home a coveted blue map at the end of the year, but so many other teams were extremely close. Westminster at Oak Mountain made it to its second straight Final Four, losing by one goal in the semifinals, while the Pelham Panthers did the same thing in their fourth Final Four appearance in five years.

Both of those teams could have won championships, as could have Oak Mountain and Chelsea. The Eagles spent a large portion of the year at No. 1 in the 7A poll swapping spots with 7A opponent Hoover, but after splitting regular-season matchups, it was a 2-0 win in the playoffs that allowed Hoover to move on before eventually winning the 7A title.

For Chelsea, they won the Class 6A Area 8 championship, beating Pelham twice, but then lost in overtime to the Panthers in the playoffs, as both of those teams were two of the best throughout the season.

Those were just some of the highlights from a spectacular season, none of which would have been possible without some of the best playmakers in the state. Below, we highlight the best boys’ soccer players from across Shelby County this year with our 2019 All-County soccer team.

Forward: Logan Frost, senior, Briarwood. For the second year in a row, Frost has been named the player of the year, and for good reason. He not only led the county with 69 points thanks to 24 goals and 21 assists, but was the best player on the only state championship team earning the Class 5A State Championship game MVP. He finished third in goals at Briarwood in school history with 112 and fourth in assists with 80.

Forward: Lando Nichols, senior, Chelsea. Nichols was also considered for the Player of the Year award, and was one of the most fun players to watch in 2019. He posted 24 goals as well and added 17 assists to set the school record for a career with 45.

Forward: Patrick Guffey, junior, Oak Mountain. Guffey posted 18 goals and 15 assists for 51 points this season, and looked to grow as a team player as the year went along. He’ll be very dangerous in 2020.

Forward: Zach Fuller, senior, Helena. While Helena competed in a difficult area with Chelsea and Pelham, that didn’t stop Zachary Fuller from leading the county in goals with 25. He was the team captain, and special to watch.

Midfield: Tony Nettuno, senior, Chelsea. Nettuno had a special career and closed it out with 12 goals and nine assists for the Hornets this year. Headed to the University of Montevallo, he also set a school record for career interceptions with 64.

Midfield: Cody Wells, senior, Oak Mountain. A guy who was all over the field and could make plays for his teammates, Wells finished his senior year with 13 goals and 10 assists for 36 points

Midfield: Irvin Rodriguez, senior, Pelham. His time at Pelham has come to an end, but Rodriguez will be remembered for a long time. He led the team to its first state championship in 2017 and finished as the Panthers’ all-time leader in goals and points. In his final season, Rodriguez posted17 goals and six assists.

Defender: Daniel Olvera, senior, Spain Park. During the nomination process, several coaches brought up Daniel Olvera as a player being more than deserving of a spot. He was a two-year team captain for the Jaguars and the team’s defensive player of the year. Any time he was off the field, the team struggled defensively.

Defender: Kevin Santana, senior, Thompson. Santana was another player mentioned by multiple coaches, and while he was a strong defender, he also sprung forward the offense with six goals and nine assists this season.

Defender: Daniel Roman, senior, Pelham. Pelham gave up two goals or less in 22 of 26 games this season, and that was in large part thanks to Roman as the team’s defensive MVP. He also added three goals and one assist offensively.

Defender: Ryan Webb, junior, Oak Mountain. Webb was so good this year, he should be known as the county’s defensive player of the year. He cleared 15 balls from crossing the goalie line this year, which was an incredible mark and the biggest reason the Eagles had so much success at stopping some of the best offenses in the state.

Goalkeeper: Sam Candler, senior, Briarwood. This was a pretty clear choice. Candler posted 16 shutouts in 25 games, and helped the Lions set the state record for most consecutive shutouts with 10 early in the season. In 25 games, he allowed just 11 goals, and was a key piece to Briarwood’s 2019 state championship, posting three shutouts and allowing just two combined goals in the playoffs.

Forward: Preston Hamilton, junior, Spain Park. The best scoring threat for the Jags this season, Hamilton posted 10 goals and three assists to lead the team as a junior.

Forward: Jose Villanueva, junior, Thompson. Villanueava led the Warriors in goals scored this year posting nine with 10 assists, and was also recognized by other coaches for his effort as a junior.

Midfield: Price Leonard, senior, Westminster. With the midfield being so deep across the county this year, the second team is really an extension of the first team, especially with Leonard. He led the Knights with 15 goals and 10 assists to take them to their second straight Final Four after earning MVP of the championship game a year earlier.

Midfield: Andrew Messier, junior, Chelsea. Messier was one of the three dominant players for the Hornets this year posting 11 goals and nine assists. He also set a school record for career tackles won with 101 and set the single season record with a remarkable 60.

Midfield: Donald Wilson, senior, Indian Springs. Wilson has been a staple at Indian Springs the last several years, and despite the move up to the 4A-5A classification this year, he still had an impact on the field for his team to earn a spot on the second team.

Defender: Eber Serrano, senior, Pelham. One of the team captains, Serrano not only scored seven goals, including a game-winner to lift the Panthers past Chelsea in the playoffs, but also added five assists and sprung the offense forward from the center defensive mid position.

Defender: Greg Blue, senior, Pelham. Blue played all over the field this year for Pelham due to injuries. He played half the season at center back and the other half at right wing. Offensively, he posted six goals and 10 assists while also playing solid defense as one of the team’s anchors.

Defender: Jeremiah Sachs, junior, Westminster. Against difficult opponents, Sachs solidified Westminster’s backline throughout the season, while also playing well in the middle of the field.

Defender: Grant Grissom, junior, Briarwood. You can’t leave the best defender on the best team off the list. Grissom was a huge reason the Lions set the state record for consecutive shutouts and allowed just 11 goals in 25 games.

Goalkeeper: David Clinton, senior, Pelham and Zay Brown, senior, Oak Mountain. There was no way you could leave one of these two keepers off the list after incredible senior seasons. Clinton made 105 saves this season and posted six shutouts for the Panthers, while Brown was one of the most passionate players and posted 12 shutouts with a goals against average of .74.

A win for above: Westminster honors Headley with school’s…