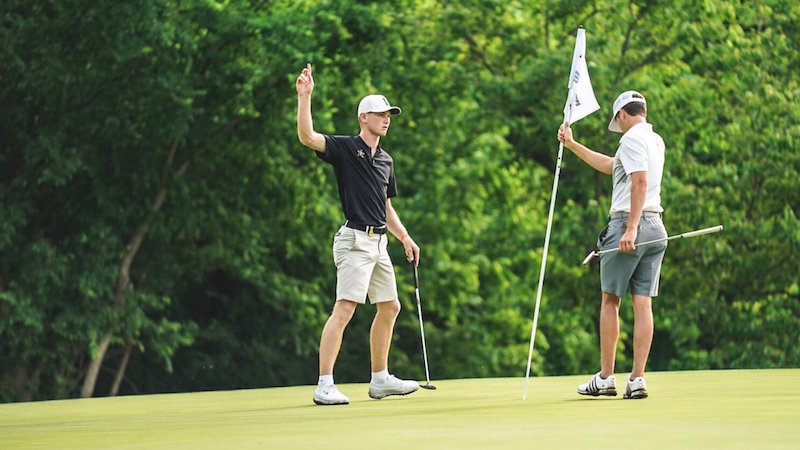 Former Spain Park golf standout Patrick Martin recently had his Vanderbilt golf career come to an end after setting a historic mark with the Commodores. (File)

FAYETTEVILLE, Ark. – Time flies when you’re having fun, and that fun for former Spain Park golfer Patrick Martin has included etching his name in the history books of Vanderbilt golf over the last four years.

Now, his ride with the Commodores has officially come to an end after Vandy’s 2019 golf season came to an end in the semifinals of the NCAA golf tournament on Tuesday, May 28.

He also earned academic awards, All-American awards and was named as a Nicklaus Award Finalist in 2017 for the top college golf player in the country.

Before arriving at Vanderbilt, however, Martin was a standout high school golfer locally at Spain Park High School.

With the Jaguars, he won the 2015 individual AHSAA Class 7A State Championship, and academically was a member of the National Honor Society, Rho Kappa, Latin Honor Society, Mu Alpha Theta and Student Government Association.

Also ahead of his time at Vanderbilt, Martin won the Alabama State match Play Championship in 2015, went 3-0 in the USA-China youth golf matches in 2013 and was a finalist for the AJGA/USGA Presidential Leadership award in 2013 and 2014.

All of those high marks earned him the right of being deemed the 19th best recruit for the class of 2015, which in turn landed him on the Vanderbilt golf team.

As a freshman, Martin had five top 10 finishes and was named to the All-Freshman Team.

That led into one of his best season as a sophomore where he had a stroke average of 70.34, which became the second-lowest in program history.

He played in 11 events and finished with six top 10 finishes, including his first collegiate win at the Schenkel Invitational. a tie for third at the NCAA College Grove Regional and a runner-up finish at the SEC Championship after posting a 10-under par aggregate total of 200—a Vanderbilt record at the event. He also finished in a tie for second in the Tavistock Collegiate Invitational.

During his junior season, he wasn’t quite as sharp as his three other years, but still had some stellar performances with one top-10 finish in the regular season and a third-place finish at the NCAA Kissimmee Regional.

That led to his senior season, which just came to an end, and in stellar fashion.

During his senior season, he had one runner-up finish at the Mason Rudolph Championship, and then posted two other top five finishes with a finish of third at the Tavistock Collegiate and a finish of T4 at the Florida Gators Invitational.

Those were part of five top 10 finishes as he finished tied for seventh at the Shoal Creek Invitational and tied for 10th at the Valspar Collegiate Championship.

In the NCAA Division I Championships, he helped lead the Commodores to the semifinals with a 5&4 victory in the quarterfinals where Vandy won three matches to two.

The Commodores ended up falling in the semis to eventual champion Stanford, to bring Martin’s career to an end, but his historic mark had been left. In the stroke play portion of the tournament, Martin ended up finishing in a tie for 19th with a four-day total score of 5-over par.

While his career didn’t come to the championship end he had hoped for, Martin has now left his mark on two different programs, making history at both Spain Park High School and Vanderbilt University.

Neither of those is a small feat, and no matter where his golf career takes him next, those remarkable accomplishments can’t be taken away from him.