It has been said that the best way to learn something is to teach it. Vincent Middle High School students took learning history a step further by becoming characters in a living museum. 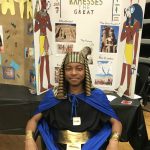 On Thursday, May 16, the school’s auditorium became a flashback in time with students and their leader, teacher Dawn Howard.

The Living Museum is the culmination of a year-long learning project. In the fall, students were asked to choose a character from history. The character could be anyone who they found interesting and did something noteworthy.

This assignment was what is termed integrated learning as it crossed the path of several subjects and learning skills: English, history, writing, research, creativity and public speaking to name a few.

During the school year, in English class they research the character and write a research paper and complete an annotated bibliography; which clearly explains why this assignment begins in the fall and takes all school year to complete. An annotated bibliography is very detailed and descriptive. This is an example of what students experience in 10th and 11th grade AP history and AP government classes.

Students then create a visual aid with props and an authentic costume for their character. They are given the option to purchase, make or borrow the costume. The project begins to take life when they practice their two-minute speeches in class in preparation for “going live!”

For the spectator, it is like walking through a time warp—meeting characters like Bonnie and Clyde, played by Kathleen Philips and Hayden Conley, both 11th graders. Together they were quite entertaining as they told their story ping-ponging from one back to the other.

Then, an eye catches Maya Angelou (Jakiya Threatt, 11th grade) whose impact on humanity is undeniable. Of course, the auditorium was peppered with sporting greats like Hank Aaron (Trent Hayes, 11th grade) and Muhammad Ali (Chris Hardie, 12th grade) and 10th grader Molly Reynolds was a reminder of the upholsterer, Betsy Ross, who became famous for making the first American flag.

Then there were characters that were obviously developed from the heart. Tion Wright (11th grade) played Sgt. Maj. Mary Kyser, her current JROTC leader—a tribute to her inspiration. “This was a surprise, I did not know about this,” said the smiling real Kyser.

And then there was Kennedy Cobb, a 10th grader who portrayed Fallon Taylor the young, beautiful horse barrel racer, who through a tragic accident and perseverance and passion for her sport, recovered to race again and speak out for safety helmets.

Cobb’s love for the sport was heard in her voice and seen in her eyes; she was at ease in character.

The evening’s supervisor, Dawn Howard said, “The kids did a great job! I am so proud of them. This is definitely my favorite history project of the year!”