COLUMBIANA – A 20-year-old Alabaster man is facing a pair of felony charges after a routine search by corrections officials at the Shelby County Jail allegedly found him to be in possession of methamphetamine with the intent to distribute it while he was incarcerated. 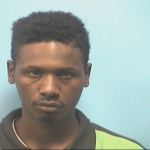 The Shelby County Drug Enforcement Task Force arrested Tavarus Tyriq Hall, who lists an address on Fourth Avenue Northeast in Alabaster, on May 22 and charged him with felony counts of unlawful distribution of a controlled substance and promoting prison contraband.

Hall’s charges came while he was incarcerated in the county jail on a previous misdemeanor second-degree marijuana possession charge. Task Force Commander Lt. Clay Hammac said SCSO corrections officers discovered methamphetamine in Hall’s possession during a routine safety and security inspection at the jail in mid-April, and said officers determined he intended to distribute the substance within the jail.

He is set to appear in Shelby County District Court for a preliminary hearing in front of Judge Daniel Crowson on June 27.