ALABASTER – A 22-year-old Alabaster man is being held in the Shelby County Jail without bond after he was arrested and charged with allegedly distributing marijuana in Pelham earlier this year. 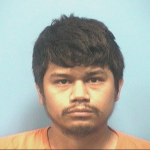 The Shelby County Drug Enforcement Task Force arrested Jhonathan Nuve Nunez, who lists an address on Camelia Lane, and charged him with two counts of unlawful distribution of a controlled substance, one count of first-degree unlawful possession of marijuana and one count of possession of drug paraphernalia.

Nunez’s charges came after he allegedly distributed marijuana on Pelham Parkway on Feb. 11, and again on Oak Mountain Circle in Pelham on Feb. 20. On Feb. 20, he was allegedly found to be in possession of 0.79 grams of marijuana and a grinder and bottle cap used to smoke marijuana, leading to his marijuana possession and drug paraphernalia possession charges.

He previously pleaded guilty to a second-degree marijuana possession charge in June 2018, and was sentenced to two years of probation and ordered to pay a $150 fine. He was enrolled in the Shelby County Community Corrections program when he was arrested on the most recent charges, causing his probation to be revoked.

He is set to appear in Shelby County District Court for a preliminary hearing in front of Judge Daniel Crowson on June 27.