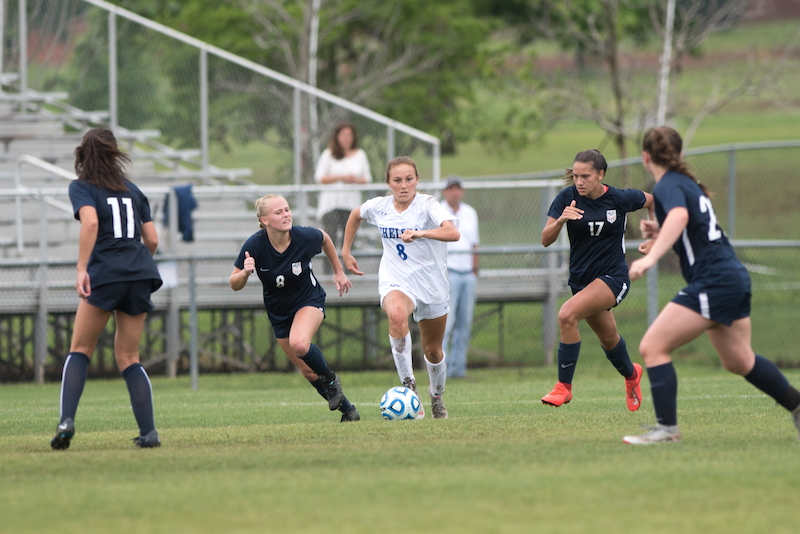 Chelsea's Kailey Littleford, above, led the county with 38 goals in 2019 and was named to the All-County First Team. (Reporter photo/Keith McCoy)

The soccer season in Shelby County never disappoints, and the 2019 season marked one of the strongest girls’ soccer seasons the county has ever seen from a talent standpoint.

While we only had one team, the Westmisnter at Oak Mountain Knights, win a state championship, the Chelsea Hornets also played for a championship and spent the majority of the season at No. 1 in Class 6A, while Oak Mountain, Spain Park and Pelham also had remarkable seasons.

Putting together the 2019 All-County girls’ soccer team was extremely difficult due to the depth of talent. With five players scoring 30-plus goals and 11 scoring 20-plus goals, as well as some of the best assist players in the state’s history, it was a remarkable season that has sadly come to an end. But below, we highlight all of those talented athletes worthy of being on the 2019 All-County girls’ soccer team.

Forward: Morgan White, junior, Westminster at Oak Mountain. This year’s Player of the Year earned that mark not only by scoring 36 goals and posting eight assists to lead her team to the Class 1A-3A State Championship, but her fight to do so. After being injured in the semifinals of the Final Four, she came back and scored the game-winning goal in the championship game with two seconds left in overtime. In that same game, she also scored her 100th career goal as a junior.

Forward: Kailey Littleford, junior, Chelsea. Arguably the biggest scoring threat in the county, Littleford caused you to drop your jaw on so many occasions in 2019. She led the county with 38 goals and added 18 assists. With determination going into her senior year of redeeming a tough state championship loss, she could be the best player in the state next year.

Forward: Haley Duca, sophomore, Chelsea. She’s just a sophomore. Let that sink in before seeing that she finished the 2019 season with 31 goals and 16 assists. For the Hornets and Hammett to have two more years with her, and one more with both her and Littleford, they’ll again be one of the most dangerous threats in 2020.

Forward: Nicole Payne, senior, Oak Mountain. With 26 assists this season, Payne finished second in that category in the county and also added 24 goals. As a track star, she was also the fastest player on the field at any given moment and helped propel several scoring threats with her teammates Danielle Retief and Emmi Long.

Forward: Danielle Retief, junior, Oak Mountain. Retief finished fourth in the county in goals with 34, which is why we have five forward spots on the first team. You couldn’t ignore her ability as a junior, and there was no way she could be left off the first team. She’ll be looked upon as a leader during her senior season.

Midfield: Lexie Duca, senior, Chelsea. In the quarterfinals of the playoffs, Duca set the state assist record for assists at 108 to etch her name in the AHSAA history books. In her senior season alone, she posted 36 assists to lead the county by a wide margin and also scored 13 goals. There wasn’t a better team player or leader in this county.

Midfield: Kori Ingram, sophomore, Pelham. The Panthers continue to get better each year and it’s because of young players like Ingram gaining experience. She posted 23 goals and 17 assists as a sophomore, and is just one of several young players that put up unbelievable numbers for Pelham in 2019.

Midfield: Taylor Davis, sophomore, Helena. It’s scary to think that a sophomore finished tied for second in goals this year, but that’s the case with Davis’ 36 goals, while she also added six assists. In three years with the Huskies, Davis has 73 goals and 16 assists.

Defender: Carson Reeves, senior, Chelsea. Chelsea had two really good senior leaders on the back line, and one of those two was Reeves. She scored six goals and had three assists offensively, but was key in the Hornets giving up just 24 goals in 25 games.

Defender: Emily Cruce, senior, Oak Mountain. As a senior with 12 clean sheets, Cruce was the leader of one of the best defenses in the county. She was a team captain, and helped keep the back line together.

Defender: Megan Hurley, senior, Chelsea. A four-year starter, Hurley was the other leader on Chelsea’s back line. She had a personal best of two goals and six assists in 2019 to go out on a high note.

Defender: Morgan Snyder, freshman, Pelham. As a freshman defender, Snyder flashed some brilliance and somehow found the back of the net seven times and posted 10 assists. This was her first year playing, and she was named the team’s defensive MVP. Watch out for her in the years to come.

Goalkeeper: MacKenzie Titus, sophomore, Chelsea. While she didn’t face a ton of pressure and the season didn’t end the way she wanted, Titus has as much potential at the keeper position as we have ever seen. She made some remarkable saves this year that left you wondering how they were possible. She had seven shutouts and 54 saves this season.

Forward: Michelle Hernandez, junior, Pelham. Hernandez is a major reason Pelham is trending strongly in the right direction. She finished her junior year with 28 goals and six assists, and scored the only goal in Pelham girls’ soccer playoff history.

Forward: Roby Boatman, senior, Helena. With 18 goals and 17 assists, Boatman’s stellar career came to an end. She was a four-year starter that left an impressive mark on Helena’s program thanks to a career total of 46 goals and 33 assists.

Forward: Jasmine Greene, senior, Spain Park. One of the most fun players to watch regardless of what’s happening, Greene’s historic career has come to an end after another special season with the Jags.

Forward: Riley Kate Hulsy, freshman, Helena. As a freshman, Hulsy scored 21 goals and had nine assists. Being one of the players to score 20-plus goals, she’s going to have a bright future with the Huskies.

Midfield: Claire Guillen, senior, Chelsea. With 22 goals and 16 assists, Guillen was one of the best midfielders this season. On a team of stars, she shined brightly.

Midfield: Haley Greene, senior, Spain Park. While she spent a chunk of the season injured, Greene was one of the elite players offensively that could take the ball from one end of the field to the other and score a goal.

Midfield: Zoe Guzman, senior, Calera. The leader of Calera’s team, Guzman posted 18 goals and eight assists offensively, and was also strong defensively with more than 60 stops during her senior year.

Midfield: Emmi Long, junior, Oak Mountain. Long will be one of the strongest players in the county next year at this position after posting 10 goals and 12 assists this season.

Defender: Kaitlin Maynard, sophomore, Oak Mountain. As a sophomore, she has plenty of room to grow, but she also had the presence of a veteran this year with 12 clean sheets and eighth goals offensively. She’ll be one of the best defenders in the county next year.

Defender: Emma Brown, senior, Thompson. As the captain and leader of the team, Brown kept the Warriors going even when they hit rough patches. She posted one goal and three assists offensively.

Defender: Bekah Anderson, junior, Westminster at Oak Mountain. The best defender on the only girls’ team to win a state championship, Anderson played a key leadership role on the backline and posted six assists.

Defender: Carrie Kwarcinski, senior, Briarwood. As one of two captain’s on the team, Kwarcinski was a tough defensive player going up against each opponent’s best player. She also had five goals and four assists.

Goalkeeper: Mary Catherine Griffith, junior, Westminster at Oak Mountain. While the Knights split time at keeper with both Caroline Black and Tate Doggett, Griffith had to play down the stretch and became one of the best keepers in the county. She made an incredible game-winning save just before White’s goal in overtime to help the Knights win the title.