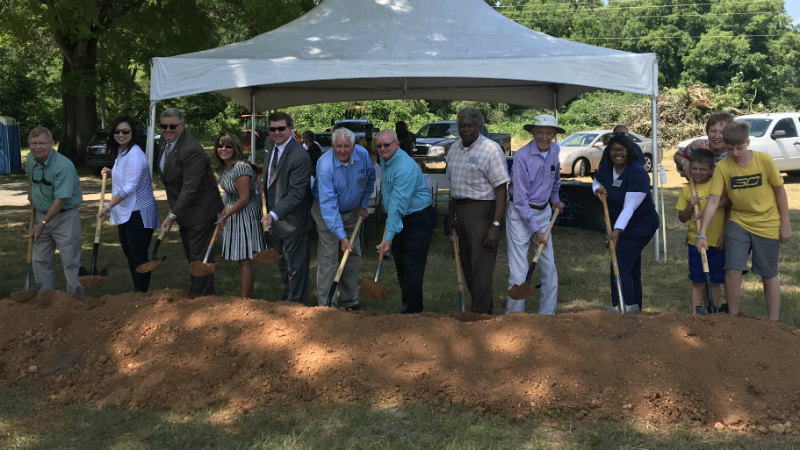 Officials participate in a groundbreaking ceremony at the site of a planned Burger King and Popeyes development in Harpersville on Tuesday, May 28. (FOR THE REPORTER/KATHY COPELAND)

HARPERSVILLE – Excitement was in the air on Tuesday, May 28 as town officials, franchise representatives, members of the community, representatives of The Shelby County Chamber and 58 INC. all gathered to break ground on the newest retail project for the Harpersville area.

The audience, feeling the toasty temperature, was grateful to be seated under a white tent on loan from Morgan Creek Winery and quickly quieted as Harpersville Mayor Don Greene welcomed everyone and acknowledged his colleagues.

In attendance were Town Council members Martin Dates, Janet Gill, Beverly Johnson and William Rayfield. Reportedly, Councilwoman Shelia Rich was regretful she had to miss the celebration due to her work schedule.

Then Greene acknowledged a special guest sitting on the front row: Louise Cole, accompanied by her sister, Billy Darby, and her daughter, Elizabeth Ann Darby.

“Ms. Cole has lived on this property for 65 years. Without her willingness to sell her home and move to Farmingdale, we would not be celebrating on this site today,” Greene said.

Introducing Pete Morando, representing Premier Kings Inc, and inviting him to say a few words, Greene reached out to shake hands and said, “We heartily welcome you and the Burger King and Popeyes organization to our community.”

“We are ecstatic about being located right here,” said Morando before introducing Tony Mierholtz, also with the company. “We at the Premier Kings Inc. franchise have 189 Burger Kings. This represents not only growth within the company, but it adds an additional location and community to our system.”

The Burger King system operates more than 11,200 restaurants in all 50 states and 66 countries and U.S. territories worldwide. About 90 percent of Burger King restaurants are owned and operated by independent franchisees.

“We jump from Atlanta, Dothan, Montgomery, Birmingham, Huntsville and coastal areas Jacksonville and Savannah,” Morando said as he explained they will be looking to hire at all levels for this facility.

Transitioning into the relationship with Popeyes, he said, “We are just getting into Popeyes; we own 25.”

Founded in 1972, Popeyes has become one of the world’s largest chicken, quick-service restaurants with over 3,000 restaurants in the U.S. and around the world.

“We are proud to have Popeyes join the Harpersville community. They will employ our residents and increase our tax base, in addition to having good Cajun style food,” said Greene.

“This is a great example of government entities working together. We appreciate 58 INC. and Yvonne (Murray) and Melody (Whitten). We are seeing the fruits of their labor today,” said Greene.