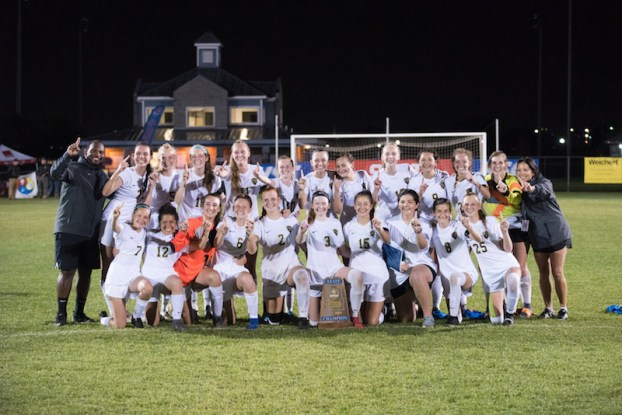 Westminster at Oak Mountain girls’ soccer head coach Jay Hammond, far left, led the Knights to their first title in school history after taking over for former coach Ken Headley just before the season after he passed away from brain cancer. (Reporter photo/Keith McCoy)

When former head coach Ken Headley passed away less than two months before the season started from a battle with brain cancer, the team was torn into pieces.

But despite his departure, the coach who dreamed of turning the Knights into a championship team for the first time wasn’t going to let them stay broken and quickly helped put the pieces back together as the team vowed to play in his honor throughout the 2019 season.

It all started under the leadership of head coach Jay Hammond, who found out just a few days before Headley’s passing that he would be taking the reins of running the team with Headley’s assistance as best he could give.

He, along with the team, became determined to work to bring the team to where Headley had hoped, and at the end of the 2019 season, they brought the former head coach a state championship in one of the most remarkable ways possible.

“Even though he was only there for a year, he left a huge legacy with what he had built by developing them and challenging them to get them to play at a championship level,” Hammond said. “And for us to do that for him was definitely a storybook telling.”

With the accomplishment of leading the Knights to their first ever state championship appearance and title, Hammond has been named the 2019 Shelby County Coach of the Year during one of the more competitive years in girls soccer the county has ever seen, especially from a Chelsea Hornets team run by Jonathan Hammett that was unbelievable as well.

And while the award is a sort of corroboration for a young Hammond who graduated locally from Oak Mountain High School in 2010, he’s the first to admit that this historic season was thanks to the girls and what “Ken built.”

Hammond was originally supposed to come in and run sessions while Headley was having treatments, but that all changed on Jan. 8.

“We met on that Friday (Jan. 4) in January to talk about how the season would be run,” Hammond said. “Then, a few days later, we got the phone call that he had passed.”

The school, the players, the teachers, the administrators and the coaching staff were all devastated and heartbroken by the news of his passing after he was diagnosed with the disease just days after the 2018 season had come to an end, and less than a year later, it had taken his life.

“We had a team meeting just before our first practice and determined everything Ken had done, wasn’t going to be forgotten,” Hammond said. “We dedicated the season to him and wore arm bands with his initials on them to inspire us every day.

“Every time we ended a prayer before or after a game, we said ‘We love you coach Ken, we’re playing for you.’”

Sporting those black bands with the letters KH etched in orange, the Knights took to the field for the 2019 season on March 2 and started an unbelievable journey.

After a 5-2-1 start to the season, it was one of those two losses that actually meant the most to the team—a 3-1 loss to Class 7A No. 2 Oak Mountain.

“After we lost to Oak Mountain, I knew we could win a championship,” Hammond said. “I know that sounds weird, but I think that game, we realized we could play with anybody. Didn’t matter what classification. At that point, their confidence grew tenfold. They just went out and played the game they loved and realized they had superior talent.”

From that point on, Westminster went on to win 11 of their final 12 games, scoring at least three goals in each win. That also included a 3-0 mark in the postseason for the Knights with two 3-2 victories on their way to the title.

But it was what happened in the state championship game that truly brought the season full circle.

After an incredible battle with Altamont through 80 minutes of play, the two teams were tied 2-2 at the end of regulation, which led to overtime for the title.

With the game being a grueling physical battle throughout, junior scoring leader Morgan White was struggling after suffering a leg injury in the semifinal game the day before.

“She told me before the first overtime, ‘I don’t think I can play two overtimes,’” Hammond said. “Altamont was playing so good and physical and she wanted to beat them so bad. We determined we were going to have everyone sprint and work their tails off and if we did that, we would win the game in that first overtime.”

For the longest time, however, it looked as if the two were headed on a direct path to a second overtime after neither team could find the back of the net in the shortened overtime period.

But then, the unthinkable happened.

With the final seconds ticking off and White a good 35-40 yards from the goal, she took a couple of dribbles to her right to beat her defender and find the slightest opening.

With that quick clearing, she fired a desperation shot with five seconds remaining and sent the ball soaring high toward the center of the net. The keeper leapt, but the ball was placed perfectly and hit the back of the net with two seconds left for the thrilling victory.

“Nobody could have written that script to be honest with you,” Hammond said. “Only God could have seen that coming.”

As Hammond described it after the game, Headley was “jumping for joy from the heavens when that goal went in.”

In that moment, Headley got to see everything he had hoped for his team come to fruition.

The team that entered the season heartbroken with the goal of finishing what he started had accomplished its goal in the most remarkable way possible.

Hammond said it was a joy to coach this year’s team and that they had fun each and every day. And while he won’t take any credit, the leadership he showed in getting a team ready to compete in an extremely difficult circumstance was special.

“This is Ken’s award. This isn’t mine” Hammond said. “This is what he wanted when he took the job at Westminster. He wanted to get these girls to the level of competing to win a state championship. This is an award that is in honor of him. They had aspirations of doing this for him, and they did it.”

By ALEC ETHEREDGE | Sports Editor  One of the most soccer-rich areas in Alabama, Shelby County’s boys soccer teams had... read more