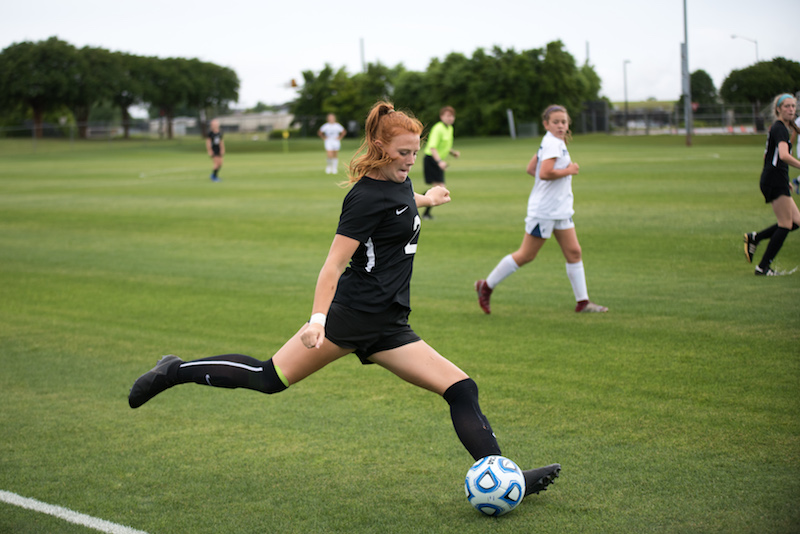 Westminster at Oak Mountain’s Morgan White has been named the 2019 girls’ soccer Player of the Year in Shelby County after a stellar season with the knights. (Reporter photo/Keith McCoy)

After a leg injury in a 4-0 semifinal victory against Cottage Hill, it was uncertain how much junior forward Morgan White would play for the Westminster at Oak Mountain Knights in their state championship matchup a day later against Altamont, but what was even more unforeseen was what she was able to do when she suited up for that title matchup.

“She only played five to seven minutes in second half of semis,” Westminster head coach Jay Hammond said. “Coming back to the hotel and seeing the swelling made it tough. She was struggling with it and ended up crying at dinner that night just saying how much it hurt. We did as much as we could to keep her off her feet. Did a lot of treatment, got her on the bike that next morning and did a lot of physical therapy with her.”

Heading into the Final Four, White was looking to claim her 100th career goal with the Knights, but after not scoring in the semis and her outlook for the championship looking bleak, it didn’t look as if she would accomplish that feat or be able to help her team as much as she wanted, as they sought out their first title in school history.

It was pre-determined that she would likely only play 40-50 minutes in the game by Hammond and the coaching staff due to the injury, but before the game she told Hammond he was going to have to drag her off the field to keep her from playing, and then during the game after being taken out briefly, before re-entering, she told him “Coach, you’re not taking me out of again.”

“It wasn’t selfish or anything like that, it was her wanting to win,” Hammond said.

Hammond trusted White and knew she wouldn’t go on the field if she wasn’t going to help the team.

Less than nine minutes into the second half, she stepped up and proved her coach right.

With 31:12 remaining in the game in a tie game, she found the back of the net for her historic 100th goal to put the Knights up 2-1 in the championship game. 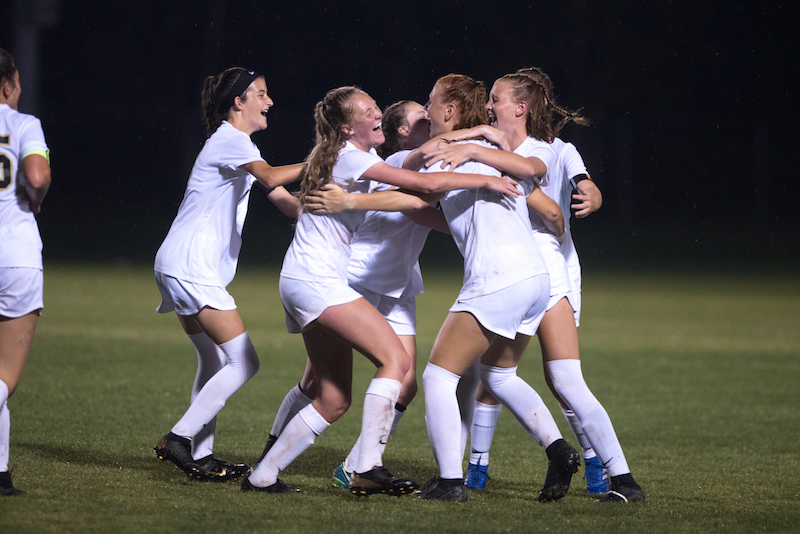 Teammates celebrate with White after she scored her 100th career goal in the state championship game. (Reporter photo/Keith McCoy)

It looked as if that would be the difference in the game, but White’s heroics weren’t done yet because Altamont came back with four minutes left to tie the game again at 2-2 to force overtime.

“She told me before the first overtime, ‘I don’t think I can play two overtimes,’” Hammond said. “Altamont was playing so good and physical and she wanted to beat them so bad. We determined we were going to have everyone sprint and work their tails off and if we did that, we would win the game in that first overtime.”

Battling through the injury and fatigue, White knew the team came into the season with one goal in mind, and she had to do whatever it took to help the team achieve that goal.

After a grueling and exhausting overtime period went into the final 30 seconds without a goal, the unthinkable happened.

In what didn’t even look like a possession, White got the ball just on the other side of midfield with the final few seconds ticking off the clock.

With five seconds left and White a good 35-40 yards from the goal, she took one good dribble move to her right to beat the oncoming defender, and then took one more dribble to give herself a clear opening at the goal.

She took the desperation shot and sent it screaming toward the top center portion of the net. Some may call it luck, some may call it skill and some may call it White being determined and wishful of not having to play another overtime, but her shot was perfect. It sailed just over the outstretched hands of the Altamont keeper and into the back of the net for the 3-2 game-winner with two seconds left on the clock.

A team that bought in at the beginning of the season to play for former head coach Ken Headley, who passed away less than two months before the season opener, had just won its first state championship on her miraculous shot.

“Nobody could have written that script to be honest with you,” Hammond said. “Only God could have seen that coming.”

White fought through a difficult injury and gave everything she had in the biggest moment of the season to help her team and scored her 100th career goal and the game-winner in the second half to seal the deal.

That’s what the best players do, and that’s why White has been named the 2019 Shelby County Player of the Year.

She totaled 36 goals to tie for second in the county, while also adding eight assists.

She beat out a strong field of players from Shelby County, including several from Chelsea. Kailey Littleford actually led the county in goals with 38 while adding 18 assists, Lexie Duca set a state record for career assists and posted 36 during her senior year, and sister Haley Duca posted 31 goals and 16 assists.

In all, the 2019 soccer season saw five players from across the county score 30-plus goals, while 11 scored 20-plus goals, making it one of the best seasons the county has seen from a depth standpoint.

But White’s resilience in the biggest moment is what tipped the scale in her favor.

As a dual-sport athlete, she has led the girls’ basketball team to two Final Four appearances, and has now led the soccer team to its first state championship in school history.

“She loves playing the game and learning,” Hammond said. “She’s like a sponge, she’s looking for more knowledge to absorb. She’s definitely a player every coach wants to coach someday.”