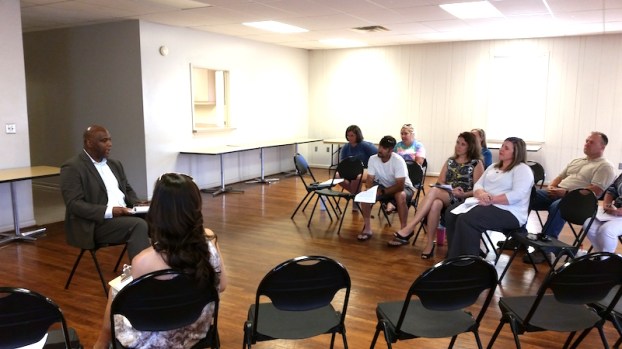 A group of parents and community leaders in the Columbiana area invited Shelby County Schools Superintendent Dr. Lewis Brooks, left, to a meeting May 20 to discuss their questions related to local schools. (Reporter Photo/Emily Sparacino)

COLUMBIANA – Shelby County Schools Superintendent Dr. Lewis Brooks met with a group of parents and community leaders on May 20 to hear questions and concerns they have regarding local schools.

Prior to inviting Brooks to meet with them, the group held two open meetings at which attendees—some of whom were students—voiced concerns about, and brainstormed solutions to, issues such as funding, infrastructure, classroom materials and educational opportunities at schools in the Columbiana, Wilsonville and Shelby areas.

“When we first started this, I had three questions to get the community fired up,” said parent Julie Horton, who worked with city leaders to organize the meetings.

The initial meetings drew dozens of parents, students and school employees to public meeting sites to voice their concerns, brainstorm potential solutions and determine what questions they wanted to ask Brooks.

Horton thanked Brooks for coming to the third meeting and having a conversation with the group.

“This is a start to something new, I feel like,” Horton said. “I’m glad you’re a part of it. We understand that the decisions were made before you, but we just want to understand some of the decisions. We want to help any way we can. We’ve got a small group that really wants to make a change of what we’re doing around here.”

Columbiana Mayor Stancil Handley said the group also seeks to strengthen the relationship and lines of communication between the Shelby County Board of Education and the community.

“What we want to do is to make you aware of some of our concerns,” he said. “We need to build a relationship with the BOE, Columbiana and the Columbiana school system.”

In the May 20 meeting, Horton asked Brooks questions from a list she and group members had compiled from discussions in the first two meetings.

Questions were related to the following: How much money is spent per child at schools that receive Title 1 funds; how money is allotted for capital projects and general building maintenance throughout the school system; why some school system employees are not based at the Central Office in Columbiana; materials such as textbooks not being available for every student to have his or her own; student concerns about AP classes only being offered online; zoning lines and school enrollment; potential use of open property behind Elvin Hill Elementary School; and how parents can learn how to apply for school grants.

Brooks took notes and said he would look into issues like textbook shortages and AP class options, and share information as he can in the coming weeks.

“I’m willing to have the discussion, even if it’s hard,” Brooks said. “My promise is I’m going to work hard for all our kids.”

Brooks shared the school system’s plans to partner with Family First on implementing its All Pro Dad parent involvement initiative at every elementary school in the county this fall.

“Research says when dads are more involved, kids do better in school,” Brooks said. “My dream is to see all these men at our schools.”