When Columbiana Middle School held its annual eighth grade awards program on May 20, there was one award that stood out from among the normal academic awards that are usually given.

Rising freshman Logan Starnes was honored for winning a $2,000 prize for his baseball team through an essay contest sponsored by the popular sport drink Powerade. 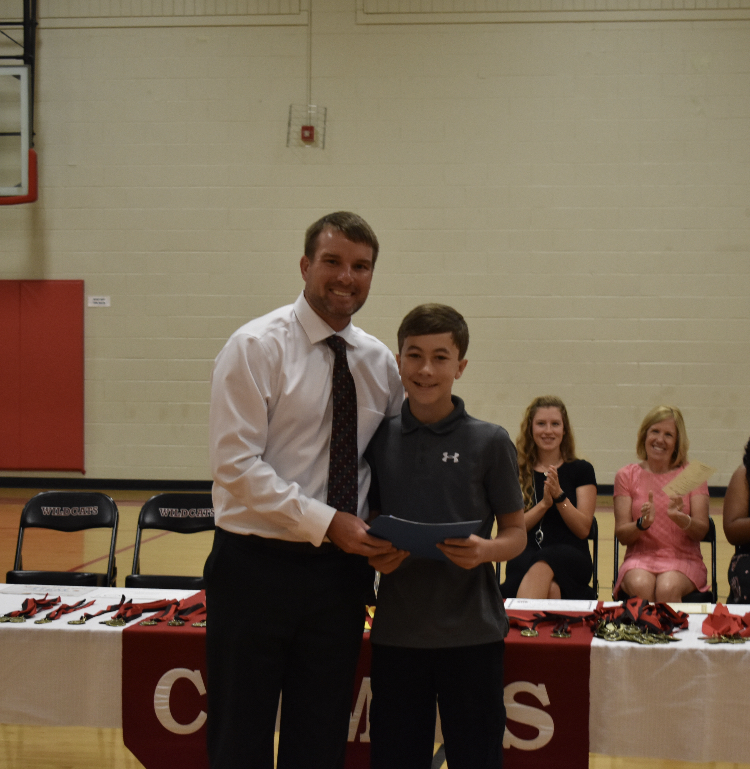 Coach Hamrick presents Logan Starnes with a $2000 check for his team from Powerade, for his award winning essay. (Contributed)

The Powerade “Power Your School” essay contest is open to students 13 years and older that write about why their school deserves, and how they would benefit from, the prize money up for grabs.

As Logan’s team was collecting bottle tops for reward points, he and his family became aware of the contest.

“It sparked his interest because at the time, we had no booster club for baseball and some parents were helping to fix the complex and fields,” Starne’s father, Keith Starnes, said. “He thought it was a great way to try to help.”
Logan chose to write about how the money could be used to make a safer complex for the team and spectators.

In his essay he wrote, “I would like for our school to receive the award so we could possibly get screening for our dugouts for safety, pitching mounds to warm up on before the games, and possibly new batting cages.”
The Powerade award can only be given to high schools, but is open to students 13 years or older.

Though Logan was only in eighth grade at the time he wrote the essay, his involvement with baseball was all centered at Shelby County High School, where he will start as a ninth grader next year.

Columbiana Middle School principal Kerry Rush was enthusiastic about her student going after this prize.

“We are thrilled that one of our own eighth graders took the initiative to reach for this award,” she said. “Even though the award technically goes to our feeder school, we’re all a team, and it shows that our kids can compete on a large scale.”

Keith Starnes encourages others to step up to the challenge these types of contests offer.

“As residents of Columbiana and athletic supporters, we are here to help in any way we can,” he said. “We can better our community if we just take the time to look for the types of contests. You would be amazed at the opportunities that are out there.”

Logan shared about why he decided to write his essay.

“I feel like we all contribute in some way, whether it’s helping cut grass or having a cleanup day,” he said. “I’m just trying to do my part as a student athlete for my hometown and to help Coach Hamrick build his facility. Baseball is important to me because it’s my passion in life. I love the game and I want other boys to have an opportunity to play like I have had, and for them to have the opportunity to play in a nice complex.”