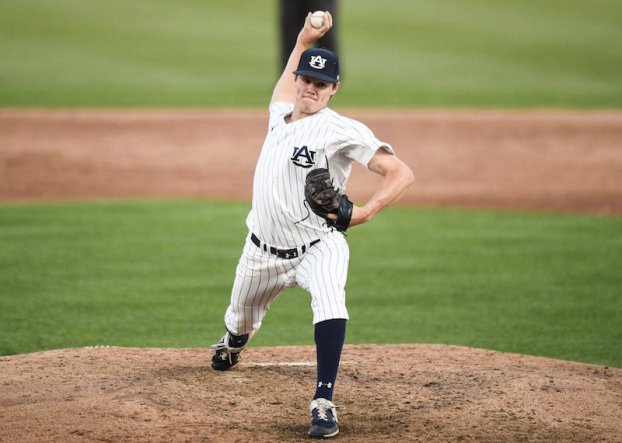 Former Helena standout and current Auburn freshman pitcher Richard Fitts played a key role in the Tigers advancing to the Super Regional round of the NCAA Tournament. (Contributed/Auburn Athletics)

ATLANTA, Ga. – While the majority of the attention was on Auburn’s Steven Williams after he blasted a walk-off three-run home run against Regional host Georgia Tech on Saturday, June 1, to propel Auburn in the winner’s bracket of the NCAA tournament, it was former Helena standout Richard Fitts that made those heroics possible.

The former pitcher for the Huskies took to the mound in the fourth inning after the Yellow Jackets had taken a 5-1 advantage through three frames, but the freshman stepped on the hill and put together his best pitching performance of the season at the most opportune time.

Known as a young pitcher that can eat up innings for the Tigers, Fitts pitched the final six innings of the game without allowing a run and only giving up four hits, while striking out four batters and walking none.

“What a special freshman outing for Richard Fitts, just amazing,” head coach Butch Thompson said after the win. “He just didn’t let them score again, and that gave us a chance.”

With his stability, Auburn didn’t have to worry about wiping away the deficit early, as he never allowed it to grow. After the Tigers scored one in the bottom of the sixth, they came to the plate in the ninth still trailing 5-2.

An RBI single from Rankin Woley drove home the first run of final inning, before Williams stepped to the plate with runners on first and second.

Down to Auburn’s final strike of the game, in an 0-2 count, Williams got a ball served on a silver platter across the middle of the plate and drove it over the fence and into the trees of right field for the three-run walk-off homer for a 6-5 victory.

With that win, Auburn advanced in the winner’s bracket of the Georgia Tech Regional, and set up a scenario where the No. 3 seed in the tournament would have to beat the Tigers both on Sunday, June 2, and Monday, June 3.

The Tigers, however, went ahead and closed out the series on Sunday afternoon with a 4-1 victory over the Yellow Jackets to advance to their second consecutive Super Regional where they’ll play at North Carolina.

For Fitts, it will mark his first trip to the Super Regionals as a freshman with the Tigers, and without his strong six innings, the Tigers likely wouldn’t be one series away from the College World Series.

In 17 appearances coming into the Georgia Tech Regional, Fitts held an overall record of 3-3 with an ERA of 5.67 and a WHIP of 1.63. He also started five games and tossed a total of 46 innings, which was fifth on the team.

He had allowed a total of 62 hits and 29 runs, while posting 37 strikeouts. Now, he’s improved to 4-3 overall, and his head coach knows the best is yet to be seen thanks to Fitts’ ability to learn from both good and bad.

“It’s a culmination of all of his outings,” Thompson said. “This is a culmination from the good and bad. Everything he learned this year, he applied in this one. He really executed some pitches. The more he pitched, the more he took the sting out of their swing. His best performance of the year, and it was needed tonight.”

Fitts will likely see time against North Carolina in the Super Regional should the Tigers have to use the bullpen in the best-of-three series.

By ALEC ETHEREDGE | Sports Editor The soccer season in Shelby County never disappoints, and the 2019 season marked one... read more