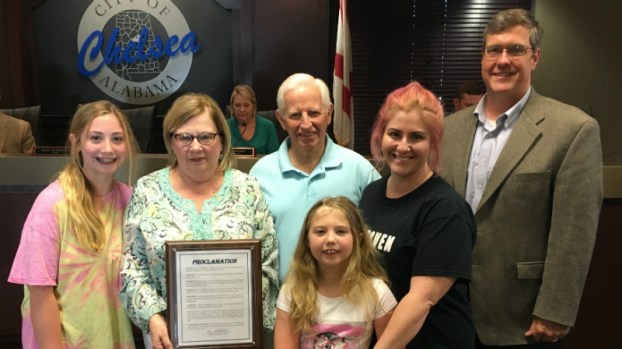 Surviving relatives of Richard Stephens—including daughter Charline Summers and her husband Butch, granddaughter Johanna Auterson and great-granddaughters Hannah Auterson and Miriam Auterson—were on hand at the Chelsea City Council meeting on Tuesday, May 21, for the presentation of a proclamation in Stephens’ honor. Also pictured is City Councilman Scott Weygand. (REPORTER PHOTO/STEPHEN DAWKINS)

CHELSEA – April 18 will be Richard Stephens Day in the city of Chelsea after a proclamation signed by Mayor Tony Picklesimer and approved by the City Council on Tuesday, May 21.

Stephens was a Seaman, Second Class in the United States Navy, and was 19 years old when he was one of 1,200 aboard the USS Indianapolis that was sunk by a Japanese submarine during World War 2 in 1942.

Stephens, who died on Thursday, April 18, was one of 316 survivors of the USS Indianapolis incident who was rescued from the Pacific Ocean after being lost at sea for several day.

“He earned the respect and admiration of all he came in contact with, and our community has sustained a substantial loss in his passing,” read the proclamation. “Richard Stephens will always be remembered for his selflessness, courage and heroic service.”

Also at the meeting, a representative of the Chelsea Fire Department announced that a dedication ceremony for the department’s new ladder truck would be held at 9 a.m. on Saturday, May 25 at Station 31.

FROM STAFF REPORTS Now that the 2019 athletic season has come to an end, the postseason awards are being dished... read more