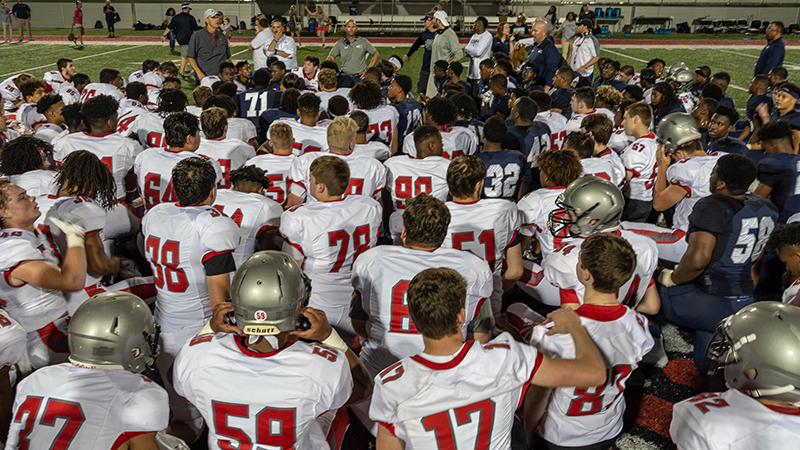 Thompson will once again face a tough schedule next season, as the Warriors have finalized their schedule for the 2019 campaign. (Reporter Photo/Neal Wagner))

ALABASTER – The Thompson Warriors will once again face a grueling Class 7A, Region 3 slate of opponents in the fall as they look to defend their state championship game appearance from last season.

THS recently finalized its 2019 football schedule, featuring four away games and non-region matchups with a few schools from south Alabama.

The Warriors are coming off two of the most successful back-to-back seasons in school history, compiling a 23-3 overall record, a region championship, school-record point totals and an appearance in the 7A title game during those two years.

Thompson will open the season at home on Aug. 24 against Davidson High School out of Mobile as part of a double-header at Warrior Stadium to raise support for the battle against childhood cancer, followed by a home contest against Foley High School.

The Warriors will continue their recently heated rivalry with region foe Hoover High School at Warrior Stadium on Sept. 6. THS and Hoover are 2-2 over the past two seasons, with THS beating Hoover for the first time ever in 2017 before the Bucs knocked the Warriors out of the playoffs later the same year. Last season, Hoover beat Thompson early in the year, but THS recorded a last-minute come-from-behind victory in the playoff semifinals to punch a ticket to the 7A title game.

Following a bye week, Thompson will travel to region opponent Spain Park on Oct. 4, followed by back-to-back region games at Vestavia Hills and at home against Mountain Brook. The Warriors beat all three last season by scores of 35-7, 21-20 and 31-7, respectively.

THS originally had a 10th game scheduled with Crestview (Florida) High School to finish out the season, but the game has been canceled.