COLUMBIANA – A 36-year-old Florida man is being held in the Shelby County Jail on bonds totaling $1.2 million after he was arrested and charged with sexually and physically assaulting two victims in Alabaster while he was armed with a sword. 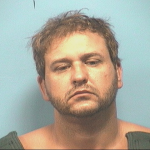 The arrest came one day after the APD responded to a report of an assault in the 100 block of Kensington Lane.

According to police, the two victims arrived at their residence, and became involved in a domestic dispute with Arwine.

“This could have turned out much worse. These women were very strong and determined to survive a very difficult situation. I’m very thankful we were able to take this guy off the streets as quickly as we did,” said Alabaster Police Chief Curtis Rigney.