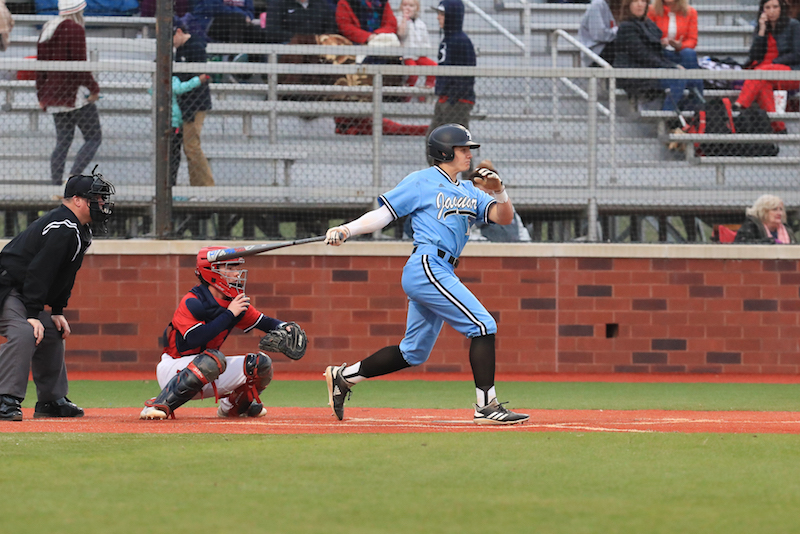 Spain Park's Colton Ledbetter was one of the biggest offensive threats in the state this year, and was one of many to make the 2019 All-County baseball team. (File)

It was a magical ride for Shelby County’s baseball teams in 2019 largely thanks to state championship appearances from both Briarwood and Chelsea.

While neither won their respective title, the postseason runs each put together were two of the more special the county has seen. In addition to those two teams, Oak Mountain, Montevallo and Shelby County spent a large portion of the season ranked inside their respective top 10, while a total of six teams ended up making the playoffs.

One aspect remained constant among each team in 2019, and that was the team work and talent level displayed across the county. It was one of the best all-around groups of players the county has had, and it’s displayed below on the 2019 All-County baseball team.

Pitcher: Jackson Kimbrell, senior, Oak Mountain. This year’s pitcher of the year, Kimbrell got hurt just before the playoffs and it was a big blow to the Eagles’ postseason. During his senior season, he went 6-2 with a 0.90 ERA while striking out 95 batters, which ranked second in the county. In 54 innings pitched, he allowed just 24 hits, 11 runs and seven earned runs. Kimbrell also played well offensively with a .369 batting average, 37 hits, 31 RBIs and a county-high seven home runs, making him one of the best all-around players in the state.

Pitcher: Connor Ball, sophomore, Chelsea. Ball had a breakout sophomore season as one of the most fiery and competitive players in the county. While his ERA was the highest on the first team at 2.12, he led the county in strikeouts with 107 and took his team all the way to the state championship series. In 75 2/3 innings, he went 9-3 overall allowing just 65 hits and 26 total runs.

Pitcher: Austin Harris, junior, Shelby County. Harris was a big reason the Wildcats spent a large chunk of 2019 inside the top five. He finished the season with an ERA of 1.11, which ranked second in the county, and 86 strikeouts, which was third in the county. He also tied for the most wins in the county with a record of 10-1.

Pitcher: Hansen McCown, senior, Oak Mountain. McCown came along nicely during his senior season and seemingly got better and better. He finished the year with 65 strikeouts, which was tied for fourth in the county, while posting an overall record of 6-2 and an ERA of 1.72 in 56 2/3 innings pitched.

Catcher: Robbie Albright, senior, Vincent. Last year’s hitter of the year, Albright closed out his Vincent career with another dominant effort at the plate. He posted a batting average of .419 and had 31 hits with 22 RBIs. He also finished third in the county with 13 doubles and blasted four home runs with 16 stolen bases.

Second Base: Jake Rivers, junior, Oak Mountain. One of the seven players that had more than 40 hits this season, Rivers was a consistent offensive threat for the Eagles. He held a batting average of .369 and posted 23 RBIs with eight extra-base hits.

Shortstop: Josh Mims, junior, Montevallo. The county’s batting average leader, Mims posted a remarkable average of .482. He only played in 26 games, but still totaled 41 hits, which was only six off the county lead. He also scored 43 runs, which was second in the county by one run and added 19 RBIs.

Third Base: Graham Blankenship, junior, Calera. Blankenship had a consistent season for the Eagles in 2019 posting 29 hits and 20 RBIs with a batting average of .362. As part of his 29 hits, he had 11 doubles in tie for fourth in the county.

Outfield: Carter Frederick, junior, Chelsea. This year’s offensive player of the year in the county, Frederick was the best hitter on a state championship team. He led the county with 46 hits and 38 RBIs, while finishing second in the county with 15 doubles. He held a batting average of .407 and posted four home runs and four stolen bases.

Outfield: Colton Ledbetter, junior, Spain Park. The argument can be made for Ledbetter to be the best player in the county and even the state after the numbers he put up as a junior. He not only held a batting average of .388, but had a county-high OPS of 1.366. He posted 40 hits, including 11 doubles, a county-high seven triples and seven home runs, which tied for the top spot, and also had 33 RBIs, which was third in the county. In addition to his presence at the plate, Ledbetter posted a 27 stolen bases, 33 walks and 44 runs, all county highs.

Outfield: Luke Percer, senior, Oak Mountain. Percer impressed during his senior season and was Oak Mountain’s biggest offensive threat next to Kimbrell. He held a batting average of .394 and posted 39 hits with 24 RBIs. He also posted 11 stolen bases and had a strong OPS of .938

Utility: Nolan Forehand, senior, Chelsea. A guy you want on your team because of his attitude and energy, Forehand was fun to watch. He posted 40 hits and 30 RBIs with 29 runs scored while maintaining a batting average of .328. His 40 hits included nine doubles, three home runs and two triples. He also added 16 walks and stolen bases.

Pitcher: Breydon Edmondson, senior, Thompson. Edmondson had a fast start to the season and finished with a 4-2 overall record and an ERA of 2.66. He also posted 54 strikeouts and allowed just 27 hits this season.

Pitcher: Linden Samaha, junior, Spain Park. He posted an overall record of 6-2 with an ERA of 1.73 as a junior and ended the season with 38 strikeouts. He also walked a county low 10 batters.

Pitcher: Carson McKinney, sophomore, Briarwood. With as much upside as any player in the county, McKinney flashed some brilliance this season in his 47 innings. He posted a record of 6-2 with an ERA of 1.42. McKinney also added 45 strikeouts and allowed just 18 total runs. At the plate, McKinney was also a consistent player with a batting average of .339 featuring 39 hits and 30 RBIs. He also led the county with 17 doubles.

Pitcher: J.P. Fox, sophomore, Shelby County. Fox posted an overall record of 5-4, but limited damage while struggling to get run support. He held an ERA of 1.98 in 42 1/3 innings pitched with 47 strikeouts and just 14 walks. At the plate, he posted a batting average of .326 with eight doubles and 26 RBIs.

Catcher: Dylan Fraser, senior, Oak Mountain. Fraser was one of the best catchers throughout the 2019 season and also fared well at the plate. He posted a batting average of .318 and posted 27 hits in just 85 games played with 15 RBIs.

First Base: Kasey Clark, senior, Pelham. Clark posted 27 RBIs, 26 hits and 24 runs scored, while holding a batting average of .338. He also added seven doubles, three home runs and two triples in addition to being one of the best defensive first basemen in the county.

Second Base: Lane Willis, senior, Spain Park. Willis was a strong playmaker for the Jags posting a batting average of .351 with 34 hits and 25 RBIs. He also added 17 stolen bases and 25 walks to his stat line.

Shortstop: Caleb Ragland, senior, Oak Mountain. With a batting average of .342, Ragland was another big threat for the Eagles. He ended his senior season with 39 hits and 20 RBIs. Of those 39 hits, nine were doubles.

Third Base: Landon Cato, senior, Oak Mountain. While his batting average dipped to .304 this season, Cato was still one of the best defensive players in the county and always a threat for a big hit. He posted 34 hits, including six doubles, three home runs and two triples, as well as 25 RBIs.

Outfield: Nick Freeman, senior, Thompson. One of the best overall outfielders in the county, both at the plate and in the field, Freeman posted a batting average of .368 thanks to 39 hits and 11 RBIs. He also added 28 runs, eight stolen bases and 16 walks.

Outfield: Jack Wilson, senior, Oak Mountain. Wilson was a great defender and at the plate was able to post a batting average of .323 with 32 hits and 17 RBIs.

Outfield: Greg Oliver, junior, Shelby County. Oliver is a solid athlete and closed his junior season with a batting average of .379 with 31 stolen bases, 32 runs scored and six doubles.

Utility: Cody Posey, sophomore, Montevallo. Posey was a guy that found big hits and finished the season with a .379 batting average with 39 hits thanks to 10 doubles and two home runs. He also added 35 RBIs to lead the Bulldogs.

Designated Hitter: Brody Moss, sophomore, Helena. Helena was young this year, but there were several players right on the cusp of making the team. Moss, however, led that young group and did make the team thanks to his batting average of .330 and his 31 hits and 22 RBIs. He had five doubles, four triples, nine stolen bases and 29 walks.