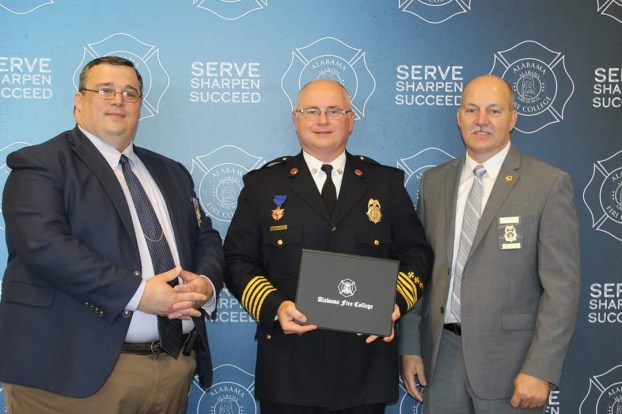 According to the Alabama Fire College, the mission of the Alabama Public Safety Leadership Academy is to broaden and enhance the management and leadership skills of select members of Alabama’s public safety agencies through a directed program exposing members to key strategic elements relevant to public safety organizational success.

The 2018-19 session began September 2018 and ended in May. More than 50 people applied for the program and 25 were accepted from places as Auburn, Orange Beach, throughout the Birmingham metropolitan area and more.

The group met once a month and covered a different topic each meeting.

“We traveled to various parts of the state to learn various things,” Honeycutt said. “Where the group met depended on what the topic was. We went down to Montgomery to learn about the legislative process, we learned about ethics, social media, television and print media, leadership principals and tips on the budgeting process. There was such a broad coverage of topics.”

Honeycutt said one topic that was especially helpful to him was learning about the legislative process. He said he also learned a lot from program facilitator Robert Ezekiel, Mountain Brook’s former fire chief who has more than 40 years of experience in public safety.

“This program is wonderful because you may find out that there’s a specific topic that you’re weak in,” he said.

Honeycutt said he hopes to have some leaders in the fire department apply for the program each year. Two fire department captains and one police sergeant have submitted applications for the upcoming session that begins in September.

“As a fire chief, that doesn’t mean my personal training should stop,” he said. “To lead by example, I need to train just like my team does every day and not sit behind a desk all the time. This was a great opportunity to better myself. It was a great networking opportunity and I built friendships along the way.”

PELHAM – For anyone struggling with hurt, pain or addiction of any kind, Lakeview Church is now offering a 12-step... read more