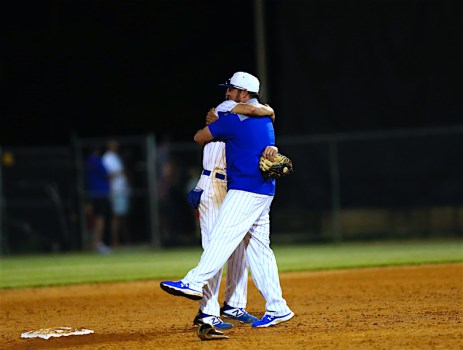 Chelsea head coach Michael Stallings hugs one of his players after sweeping Hillcrest-Tuscaloosa to earn a berth in the team's firs state championship series in school history. (For the Reporter/Cari Dean) 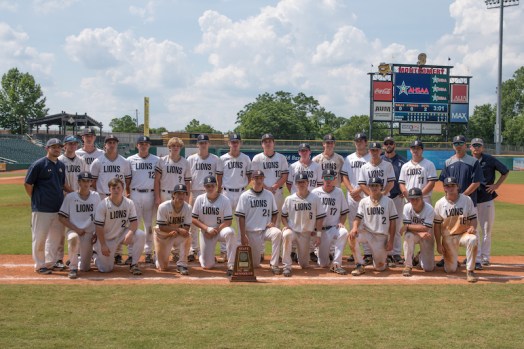 Briarwood head coach Steve Renfroe, far right, stands with his team after leading them to the state championship series for the third time in school history. (Reporter photo/Keith McCoy)

When it comes to being a successful head coach at any level, while being a leader and being knowledgeable are two of the biggest keys, one of the principal tasks is the trust you have in your players.

In 2019, it was hard to argue against any of the coaches across Shelby County being successful after one of the deepest talent pools the county has seen in a long time.

In Shelby County, there are 11 AHSAA teams and five AISA/ACSC teams, and a team from every classification that is covered by the county ended up making the playoffs.

In the AHSAA, Vincent (2A), Montevallo (4A), Briarwood (5A), Chelsea (6A), Helena (6A) and Oak Mountain (7A), all made the playoffs, while Coosa Valley, Cornerstone and Kingwood all made the postseason in the AISA and Evangel won the state championship in the ACSC.

Throughout the 2019 season, Montevallo’s Chris Shelton led his team to a spot in the top 10 all season and a berth in the postseason; Shelby County’s Cory Hamrick led the Shelby County baseball team back to a top 10 ranking for the majority of 2019; two-time defending coach of the year Helena’s PJ Guy helped his team get to the playoffs with a young team; Oak Mountain head coach Derek Irons led one of the state’s best teams; and Evangel’s Tim Smith led the Lightning to another ACSC State Championship.

But the two guys that led their teams on a magical playoff ride were Chelsea’s Michael Stallings and Briarwood’s Steve Renfroe, which earned each the award of Shelby County Coach of the Year in 2019.

While it would be nice to have one coach of the year, it was impossible to ignore what each coach did for their team this season, and it started with trust in their players.

And for both, it was the trust specifically in their seniors.

“All of our guys on our team look toward our seniors,” Stallings said. “They’ve carried us and have had a big stake in our program I’ve always tried to include them in all of the decisions that impact our program, because I tell them it’s their program. I wanted them to feel like it truly was their team so I made an emphasis to include them in everything.”

Before a decisive game three against No. 1 ranked Russell County, the seniors went up to Stallings and told him they wanted freshman Reid Gongwer to get the start with their season on the line.

“I told them ‘I wouldn’t have him with us if I didn’t have confidence in his ability to get on the mound and go. This is y’alls team and if that’s what y’all want, he’s starting on the mound,’” Stallings said.

Gongwer went out and pitched a complete game allowing just five hits and three runs with two strikeouts to lead the Hornets to a 6-3 victory and to the fourth round of the playoffs for the first time in school history.

“That was a really big point in our postseason,” Stallings said. “The impact that had on our program is what allowed us to play the way we did against Hillcrest.”

That trust in his team from Stallings was what led to such a magical run in the postseason.

As an unranked team going into the playoffs, the Hornets went on to take down No. 6 Faith Academy, No. 1 Russell County and No. 2 Hillcrest-Tuscaloosa in consecutive weeks to earn a spot in the Class 6A State Championship series.

And while Chelsea fell to Cullman in two straight games by final scores of 1-0 and 9-4, nothing can take away from the accomplishment of beating those powerhouse teams to earn a spot in the state championship series for the first time in school history.

For Briarwood and Renfroe, the story isn’t much different.

After a 0-11 start to the 2019 season, the Lions turned up their game and not only closed out the regular season with a 10-2 record to win the area championship, but also went on to beat Munford, No. 8 UMS-Wright, No. 5 Chilton County and Sylacauga in consecutive weeks in the postseason to earn a spot in the Class 5A title series.

Like the Hornets, Briarwood went on to lose two consecutive games in the championship series to come up short of the title, but it marked just the third time the team had made it that far.

After the 0-11 start, Renfroe could have lost faith in his team, but he knew they were on the cusp of a breakthrough and showed them his trust, which in turn led to the players maintaining their confidence.

A big reason for that confidence was the senior class, which Renfroe regarded as one of the top two teams he has ever coached at any level.

“It’s the best group I’ve ever been with,” Renfroe said before having to take a second to gather his emotions.

He went on to say it wasn’t just the most special group he had coached at the high school level, but that this year’s team and senior class was tied with the one he coached at Auburn with Tim Hudson and Rob Macrory for his most enjoyable ever.

It was such a special team, that Renfroe decided to name captains for the first time in his coaching career after more than 35 years as a head coach.

“It was a great ride with these guys,” Renfroe said. “We have an impressive group coming back, but they’ll have quite the legacy to live up to.”

Both Briarwood and Chelsea have a young group of players back, including three of the state’s top pitchers and two of the best bats in the state as well. The county and the state has been put on notice for the 2020 season as to what could be in store again from these two teams.