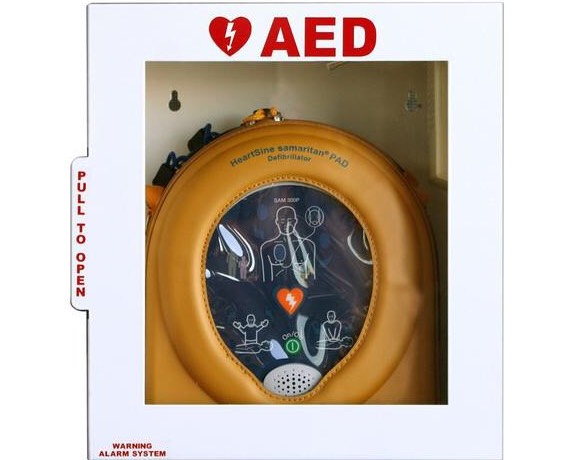 AEDs are used to deliver an electrical shock attempting to reverse the lethal heart rhythms that cause cardiac arrest. (Contributed)

PELHAM – Since becoming the Pelham Fire Department’s EMS director a year ago, Matt Maples has been hard at work figuring out a cost-effective way for the city to install up-to-date Automated External Defibrillators throughout the city.

Information about ways to improve the city’s Public Access Defibrillator Program was presented to the Pelham City Council by Maples and Fire Chief Tim Honeycutt at a work session Monday, June 3. AEDs are used to deliver an electrical shock attempting to reverse the lethal heart rhythms that cause cardiac arrest. In combination with good CPR, Maples said AEDs are the key component to reversing death.

Maples said 30-50 percent of sudden cardiac arrest victims would survive if AEDs were used within the first five minutes. About 10 percent survive when only CPR is administered.

Plans for improvement include replacing 11 outdated AEDs, most of which were purchased in 2008, and adding more at city-owned facilities throughout the city. Maples proposed placing three AEDs that are accessible to the public at the Pelham Civic Complex. The one currently there is in an area the public does not have access to, he said.

Implementing the proposed program would cost the city about $35,000. Maples said this would be a one-time cost. The only reoccurring cost would be replacing the pads and batteries every four years at a cost of $100 to $150. The AEDS come with an 8-year warranty and have an expected lifespan of 10-12 years.

Instead of hiring a third-party vendor, Maples said the fire department will take on the task of monthly AED maintenance, record keeping and training city employees on CPR and AED usage. Dates in June, July and August have already been set aside to train city employees.

Pelham residents who would like to be trained on CPR and AED usage can sign up to participate in a free course offered by the PFD. The classes are free but for those who would like to receive a certification, the cost is $35-$45. To sign up, go to PelhamAlabama.gov and click on the Fire Department link located at the top of the page in the Departments tab.

If approved by the council, Maples said the program could be implemented in about a month. The City Council will likely make a decision on matter this summer as it begins holding budget meetings for each city department. Fiscal year 2019 ends Sept. 30 and FY 2020 begins Oct. 1.

As a cardiac arrest survivor, council president Rick Hayes said improving public access to AEDs is something that is “near and dear to his heart.” Hayes went into cardiac arrest after having a major heart attack in September 2018. Hayes said he falls within the small percentage of people who survive a cardiac arrest with the use of only CPR. His brother, Shelby County Commissioner Robbie Hayes was there and began administering CPR immediately, which saved his life.