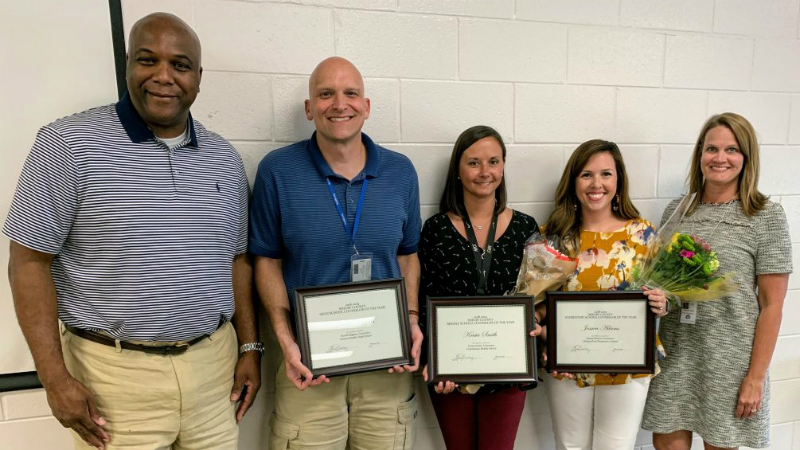 Jessi Adams, Krista Smith and Jerry Riggins were honored as Counselors of the Year by Shelby County Schools. (CONTRIBUTED)

The Shelby County School’s counseling department recently named counselors who were honored as the 2018-2019 Counselors of the Year.

The awards were given during the district’s annual counselor transition training meeting, held May 29 at the Shelby County Schools Instructional Services Center.

Kim Bailey, supervisor of counseling and testing for Shelby County Schools, said nominations for the Counselor of the Year awards are made by principals and other counselors. Ballots with descriptive information about each nominee are provided to all counselors across the district, who then vote for a winner from all three grade spans.

Jessi Adams was described as a counselor who makes each and every student feel important.

“She takes the time to truly listen to our students and build relationships with them,” her nomination read. “She follows up with students and checks on them in the hallway as well as in her office. You will often see Mrs. Adams in the hallway greeting students. She is very friendly and is that person who students feel safe to talk with. She is able to balance being the nice friendly person to also being the authoritative professional who can mediate and provide help to students who are at risk.”

Adams was commended for dealing with the many diverse needs of students, all while treating them with respect and providing them with the support they need.

“She is able to communicate with others effectively and yet at the same time following the code of ethics expected of her,” her nomination continued. “While dealing with all of these issues she is also able to coordinate testing for our school and teach her bi-weekly lessons and meet with small groups. Mrs. Adams is also a key player in helping to disaggregate test data and leading discussions at our data meetings.”

Adams is part of Chelsea Park Elementary’s Continuous School Improvement team and serves as the Leader in Me Lighthouse Coordinator. She also teaches and leads the school cheerleading club and she teaches robotics to students after school.

Krista Smith, a former English teacher and volleyball coach, was credited with having a varied school experience that has transitioned into her also being an excellent counselor. The person who nominated Smith describes watching while she was still in her teaching and coaching roles coordinate and lead a group of adults – charging them to do what was best for students, not what was best and easiest for them.

“Her passion, especially for the needy student, was and still is infectious,” her nomination letter stated. “She always puts her students first and they know it.”

“At the start of school this year, Mrs. Smith organized a bus tour that every faculty and staff member attended…administrators, teachers, paraeducators, CNP workers, etc.,” her nominator continued. “The tour traveled throughout our school zone covering Columbiana, Wilsonville, and Shelby. Mrs. Smith emceed the event, pointing out not only the discrepancies in housing within blocks or miles of one another, but also telling the stories behind the houses, who the students are who live in certain places, and who was related to whom. It was an emotional trip that brought on much discussion and opened many an eye.”

Jerry Riggins was described as having a heart for the students in the Vincent community.

“He fights for all the students, and the relationships that he has built with the community has been amazing,” his nomination letter stated.

Riggins was credited for personally throwing birthday parties for King’s Home students, celebrating with each SUCCESS student that graduates, and starting a “Character Counts” student award for students that show character when no one is watching. He was also recognized for his efforts to recognize students who have earned career technical certifications or earned the designation of being College and Career ready according to Alabama indicators.

Riggins also worked with Peer Helpers to welcome new students to VMHS and started a faculty “Few of My Favorite Things” program for teacher and staff morale.

“He goes above and beyond the yearly schedule to be creative, and our students love it,” his nomination read. “He has immersed himself with the student population with his My Future Lab, an open classroom that he has set up for students to work on applications, scholarships, and advisement. He does not stay in his office and wait on the students to come to him. He goes to the students. He is an amazing asset to our school and is truly a perfect fit.”