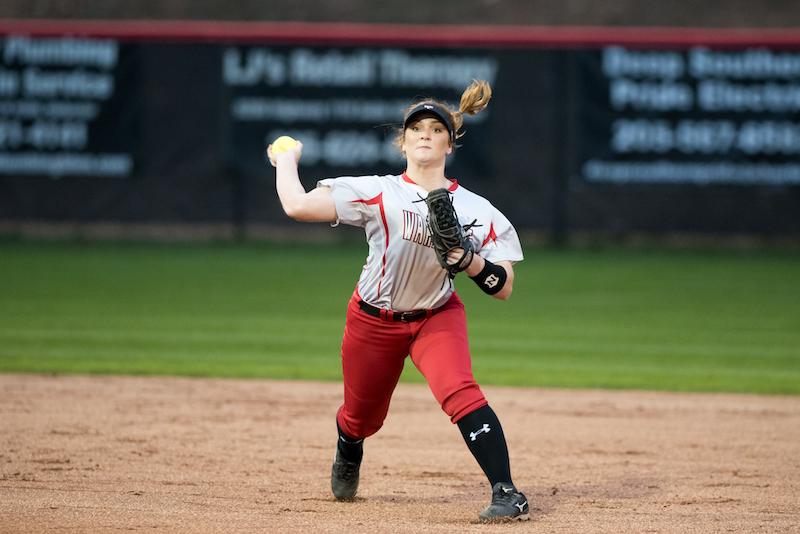 Thompson’s Lauren Haskins, above, was one of six players from the Warriors to earn a spot on the All-State team, while 22 total from Shelby County were honored. (Reporter photo/Keith McCoy)

An impressive softball season that featured three state tournament teams has officially come to an end, but the honors continue to roll in for some of the state’s best players.

On Friday, June 7, the ASWA released the 2019 All-State softball team and 22 players from 11 different teams in Shelby County earned a spot on either the first or second team or received honorable mention from five different classifications.

Thompson led the way with six All-State players, Spain Park had four, Shelby County had three, Cornerstone had two, and Briarwood, Calera, Chelsea, Helena, Oak Mountain, Pelham and Vincent all had one.

Thompson’s six players named to the team was clearly a highlight, and it included both Lauren Haskins and Kindall DeRamus as first team players.

Haskins was named a first-team infielder after batting .485 at the plate this season with 65 hits, 63 runs scored, 54 RBIs, 14 home runs and 23 stolen bases.

DeRamus wasn’t too far behind her teammate and earned a first-team outfield spot after batting .478 with 63 hits, 56 runs scored, 28 RBIs and 38 stolen bases.

The other two first teamers from the county in Class 7A were Spain Park’s Annabelle Widra and Maddie Majors.

Earning spots on the second team were Oak Mountain’s Abi Brown, as well as Eleanor DeBlock and Kennedy Foote, both from Thompson.

DeBlock, a sophomore, earned a second-team pitcher nod after posting an ERA of 2.01, a record of 10-2 and 90 strikeouts in just 97 innings pitched.

Foote joined Brown as a second-team infielder after hitting .442 at the plate with 28 hits, 30 RBIs, 31 runs scored, 14 doubles and four home runs.

In the 6A classification, all four teams were honored with a player on the team, including a first teamer from both Chelsea and Pelham, a second teamer from Helena and an honorable mention player from Calera.

Chelsea’s Brooke Burback was one of the first team players after earning her spot as a designated hitter. Burback hit .409 at the plate this year with 38 hits, 17 RBIs, 11 runs scored, six home runs and 26 walks while striking out just two times in 93 at bats.

Yoly Paredes of Pelham also earned a first-team nod as a utility player after batting .464 during her senior season with 58 hits, 42 runs scored, 41 RBIs, 14 doubles, three triples and 12 home runs.

Marfice earned a spot on the Class 6A honorable mention team after hitting .473 this season with 43 hits, 28 RBIs, 19 runs scored and 15 doubles.

The 5A classification was highlighted by three Shelby County players, including Peri Clark on the first team, as well as one Briarwood player.

Maggie West and Nataley Whitner were both honorable mention players for the Wildcats after batting .468 and .453, respectively.

In Class 2A, Vincent’s Maddy Walker was named a second team pitcher after posting an ERA of and 1.74 as well as 236 strikeouts. She was also strong at the plate posting a batting average of .381 with 32 hits and 36 RBIs.

Both Maggie White and Jenna Castleberry of Cornerstone Christian School were honored in the AISA with White earning a spot as a second team designated hitter, while Castleberry was an honorable mention player.

OF: Bella Wiggins, Fairhope, So.

OF: Morgan Nowakowski, Buckhorn, So.

OF: Collier Peaden, Northview, So.

OF: Maggie Hester, Sand Rock, So.

OF: Faith Wheat, Edgewood, So.

OF: Kayleigh Jones, Jackson Academy, So.